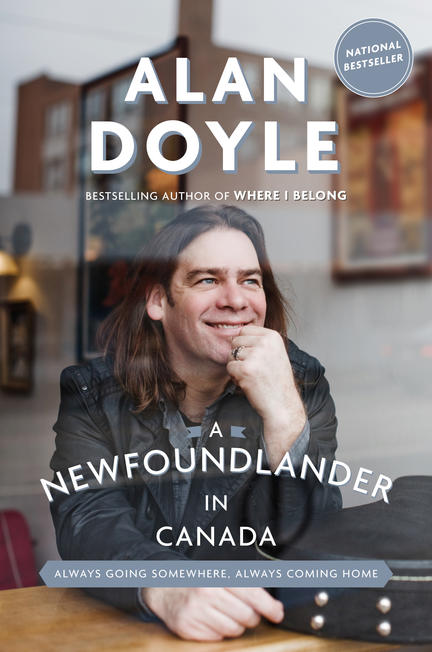 Following the fantastic success of his bestselling memoir, Where I Belong, Great Big Sea front man Alan Doyle returns with a hilarious, heartwarming account of leaving Newfoundland and discovering Canada for the first time.

Armed with the same personable, candid style found in his first book, Alan Doyle turns his perspective outward from Petty Harbour toward mainland Canada, reflecting on what it was like to venture away from the comforts of home and the familiarity of the island.
Often in a van, sometimes in a bus, occasionally in a car with broken wipers "using Bob's belt and a rope found by Paddy's Pond" to pull them back and forth, Alan and his bandmates charted new territory, and he constantly measured what he saw of the vast country against what his forefathers once called the Daemon Canada. In a period punctuated by triumphant leaps forward for the band, deflating steps backward and everything in between--opening for Barney the Dinosaur at an outdoor music festival, being propositioned at a gas station mail-order bride service in Alberta, drinking moonshine with an elderly church-goer on a Sunday morning in PEI--Alan's few established notions about Canada were often debunked and his own identity as a Newfoundlander was constantly challenged. Touring the country, he also discovered how others view Newfoundlanders and how skewed these images can sometimes be.
Heartfelt, funny and always insightful, these stories tap into the complexities of community and Canadianness, forming the portrait of a young man from a tiny fishing village trying to define and hold on to his sense of home while navigating a vast and diverse and wonder-filled country.

ALAN DOYLE is a Canadian musician and actor, best known as a lead singer in the Canadian folk-rock band Great Big Sea. Doyle's first book, Where I Belong, published in 2014, was a national bestseller, and in 2015, Doyle released his second solo album, So Let's Go. Doyle lives in St. John's, Newfoundland.

A Map of Canada

"Doyle is an engaging and gifted storyteller who has penned a laugh-out-loud, insightful, heartwarming and enjoyable tale of his first journey across Canada. . . . His curiosity and enthusiasm to explore the country is contagious, and allows us to see snippets of Canada through his eyes almost as though we were seeing it ourselves for the first time. . . . Uplifting, funny and hard to put down, A Newfoundlander in Canada is like a whiff of fresh ocean air." —Winnipeg Free Press

"A fun step-by-step trip from tightly packed tiny taverns to concerts for thousands and all the bumpy road gigs in-between." —Vancouver Sun

"This peppy memoir of a life on the road and at home finds Alan Doyle, singer-songwriter and erstwhile front man for Great Big Sea, in fine form. . . . Doyle has an eye for details, an ear for a good story and a well-honed ability to play out a yarn of his own. . . . He is deft enough to bring a light and comedic touch to the telling [of his stories]." —Atlantic Books

"Newfoundland's streets and highways are as random and surprising as the man himself. Maybe his routes are his roots. What amazes me, is for all he has seen and done, Alan Doyle has never put another human being down. You won't be able to put him down either. You will get lost on his account. Lost on a brilliant journey in a remarkable book." —Ron MacLean, host of Hockey Night in Canada

"A laugh-riot kitchen party on wheels that will make you fall in love with Canada all over again. Alan Doyle's heart is as big as his talent." —Denise Donlon, media executive and author of Fearless as Possible (Under the Circumstances)

"Doyle's effortless storytelling will have you on his side from the first page. He writes like he sings: with a sincerity and a love of life that is infectious. As you read this book, you’ll fall in love with Canada for the first time again, even if you've lived here all your life. A Newfoundlander in Canada is like the country itself—much bigger than you first realize and filled to the brim with optimism, laughter, and wide-eyed wonder. As we say in Newfoundland, 'it's wicked.'" —Mark Critch, comedian and cast member on This Hour Has 22 Minutes
Praise for Where I Belong:
• "Excellent adventure. I feel like I've lived another's life." —Russell Crowe, actor/musician
• "As Great Big Sea's frontman, Alan Doyle is exuberant, irreverent, hilariously funny and a heart-on-the-sleeve Newfoundlander. As a writer, he's all that and a bag of chips. Doyle's description of growing up on the hills and wharves of old world Petty Harbour is intimate, saucy and note-perfect. In his own words: Deadly." —Michael Crummey, award-winning author of Galore
• "Alternately laugh-out-loud funny, tearfully nostalgic and stunningly beautiful, the stories in Where I Belong have nothing to do with the famous and everything to do with the legendary. . . . The beating heart of life itself runs through this book." —Huffington Post

Other titles by Alan Doyle