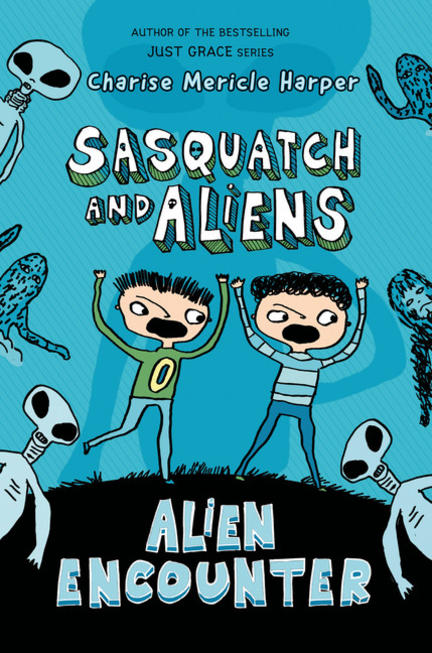 Nine-year-old Morgan is fascinated with aliens. He lives in the Pacific Northwest, land of the sasquatch, and naturally is fascinated with those as well. When he meets new kid Lewis, whose parents own a motel named the Stay On Inn, the adventures begin with slingshots, underpants, annoying older sisters, and neighbors dressed up in bear suits.

Alien Encounter by Charise Mericle Harper is a hilarious, zany alien adventure story full of funny illustrations all throughout.

“Young fans of theMagic Tree Housemysteries will warm to Morgan and Lewis and eagerly await the next installment of their antics.” —Booklist

“It's all funny and sweet and never too clever.” —The Horn Book

“The book really shines in its development of Morgan as a kid still figuring himself out in the context of a new relationship, and in its never-missing-a beat humor . . . Fans will be set-up for more antics from Morgan and Lewis in the series' future installments.” —BCCB

“Young fans of theMagic Tree House mysteries will warm to Morgan and Lewis and eagerly await the next installment of their antics.” —Booklist

“This book is the first of a series, and the seeds of its sequel are firmly sown, the alien's identity barely solved when a sasquatch turns up. It's all funny and sweet and never too clever.” —The Horn Book

“In this big-hearted, fast-paced, and deadpan first book in the Sasquatch and Aliens series, Harper (the Just Grace books) introduces a pair of nine-year-old boys who are propelled into an adventure that may or may not involve otherworldly creatures.” —Publishers Weekly

“The whimsically crafted tale features not only a pleasingly goofy cartoon cast but also some very clever misdirection in the ‘love story' episode, which is certain to elicit groans and giggles.” —BCCB on Henry's Heart

“Harper offers up a heroic heart that looks a lot like the real thing ‘without the eyes and mouth, of course,' and he's an immensely appealing figure, ideal for teaching readers about this important organ.” —Publishers Weekly on Henry's Heart

“This clever book is an excellent choice for story hours and primary-grade classrooms.” —School Library Journal on Henry's Heart

Other titles by Charise Mericle Harper

The Heat Is On

Mae and June and the Wonder Wheel

The Doodle Book of Feel Good

A Doodle/Coloring Book for All Ages