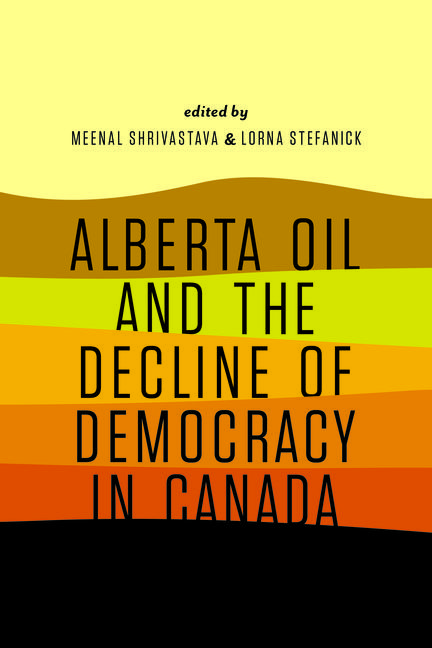 Prior to May 2015, the oil-rich jurisdiction of Alberta had, for over four decades, been a one-party state. During that time, the rule of the Progressive Conservatives essentially went unchallenged, with critiques of government policy falling on deaf ears and Alberta ranking behind other provinces in voter turnout. Given the province’s economic reliance on oil revenues, a symbiotic relationship also developed between government and the oil industry. Cross-national studies have detected a correlation between oil-dependent economies and authoritarian rule, a pattern particularly evident in Africa and the Middle East. Alberta Oil and the Decline of Democracy in Canada sets out to test the “oil inhibits democracy” hypothesis in the context of an industrialized nation in the Global North.

In probing the impact of Alberta’s powerful oil lobby on the health of democracy in the province, contributors to the volume engage with an ongoing discussion of the erosion of political liberalism in the West. In addition to examining energy policy and issues of government accountability in Alberta, they explore the ramifications of oil dependence in areas such as Aboriginal rights, environmental policy, labour law, women’s equity, urban social policy, and the arts. If, as they argue, reliance on oil has weakened democratic structures in Alberta, then what of Canada as whole, where the short-term priorities of the oil industry continue to shape federal policy? The findings in this book suggest that, to revitalize democracy, provincial and federal leaders alike must find the courage to curb the influence of the oil industry on governance.

Lorna Stefanick is an associate professor in the Governance, Law, and Management program in the Centre for State and Legal Studies at Athabasca University.and in Calgary, the first of which resulted in the book Hiding the Audience: Arts and Arts Institutions on the Prairies. Kaye divides her time between a farmstead outside Lincoln, Nebraska, and a house in Calgary, so that she may always be close to the prairie land that drives her research.Face the North Wind (1975). This manuscript came to light after his passing in 1999.

Bob Barnetson is a professor of labour relations at Athabasca University. He is the author of The Political Economy of Workplace Injury in Canada (2010) and co-editor of Farm Workers in Western Canada: Injustice and Activism (2016). His research focuses on the political economy of workplace injuries, with particular attention to child, migrant, and farm workers. Bob previously worked for a trade union, the Alberta Workers’ Compensation Board, the Alberta Labour Relations Board ,and Alberta Employment and Immigration.

Jason Foster is assistant professor of human resources and labour relations at Athabasca University. He is the author of a number of articles examining health and safety issues. He was previously the Director of Policy Analysis at the Alberta Federation of Labour where he spent more than a decade as an occupational healthy and safety practitioner, advocate, and educator. His other research interests include migrant workers, union renewal, and the contemporary labour movement. Jason lives in Edmonton, Alberta where you can listen to him on CBC Radio talking about his other passion, beer.

Paul Kellogg is professor in the Centre for Interdisciplinary Studies at Athabasca University. He is the author of "Truth Behind Bars": Reflections on the Fate of the Russian Revolution (2021) and Escape from the Staple Trap: Canadian Political Economy after Left Nationalism (2015).

Manijeh Mannani is chair of the Centre for Humanities and associate professor of English and comparative literature at Athabasca University, as well as adjunct professor of comparative literature at the University of Alberta. She specializes in the poetry of Rumi and is the author of Divine Deviants: The Dialectics of Devotion in the Poetry of Donne and Rumi. She is also the co-editor of Selves and Subjectivities: Reflections on Canadian Arts and Culture.

“This book is a clarion warning of an unacceptable shift in the public sphere towards service of particular economic interests and away from democracy and the legitimate role of the government. […] The book also reveals the ceaseless dispute between business and public interests, or considered from another standpoint, between liberty and justice.”

Other titles by Meenal Shrivastava

Other titles by Lorna Stefanick

Freedom of Information and Privacy Protection in a Networked World

Other titles by Bob Barnetson

Health and Safety in Canadian Workplaces

Political Economy of Workplace Injury in Canada (The)

Other titles by Jason Foster

Health and Safety in Canadian Workplaces

Other titles by Trevor Harrison

Other titles by Paul Kellogg

Reflections on the Fate of the Russian Revolution

Escape from the Staple Trap

Other titles by Manijeh Mannani

Identity in Iranian Film and Literature

Other titles by Gabrielle Slowey

Other titles by Karen Wall

Visual Culture at the Banff School of Fine Arts