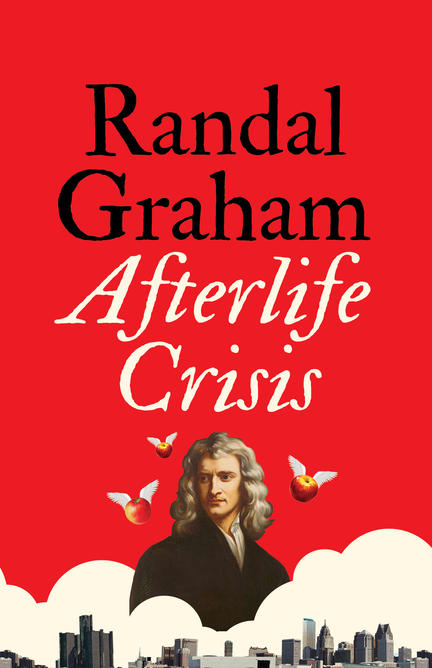 For readers of Douglas Adams, Terry Pratchett, and P.G. Wodehouse, and fans of The Good Place – a tongue in cheek fantasy that imagines Isaac Newton in the afterlife.

Where do you go after you die? Detroit.

“Finally, a hitchhiker's guide to the hereafter.” — Corey Redekop, author of Husk

Something’s rotten in the afterlife. At least that’s how it seems to Rhinnick Feynman, the one man who perceives that someone in the afterlife is tugging at history’s threads and retroactively unraveling the past. Doing his best to navigate a netherworld in which history won’t stop changing for the worse, Rhinnick sets off on a quest to put things right.

This would be a good deal easier if Rhinnick didn’t believe he was a character in a novel and that the Author was changing the past through editorial revision. And it’d be better if Rhinnick didn’t find himself facing off against Isaac Newton, Jack the Ripper, Ancient Egyptians, a pack of frenzied Napoleons, and the prophet Norm Stradamus. Come to think of it, it’d be nice if Rhinnick could manage to steer clear of the afterlife’s mental health establishment and a bevy of unexpected fiancées.

Undeterred by these terrors, Rhinnick recognizes himself as The Man the Hour Produced, and the only one equipped to outwit the forces of science and mental health.

Randal Graham is a law professor at Western University, where his teaching and research focus on ethics and legal language. His first novel, Beforelife, won the IPPY gold medal for fantasy fiction and was a top ten finalist for the Stephen Leacock Medal for Humour. Graham’s books on law and legal theory have been assigned as mandatory reading at universities across Canada and have been cited by judges on all levels of court, including the Supreme Court of Canada and the U.S. Supreme Court. He lives in London, Ontario.

Afterlife Crisis is the second story in the Beforelife universe, a world that you might think of as the afterlife. The people who live there wouldn’t think of it as the afterlife, though, because they don’t think that anything comes before it. They call their world Detroit. Almost all the people who live in that world have forgotten their pre-mortem lives, and think that people simply pop into existence by emerging from the Styx and getting on with eternal life. Anyone who remembers having lived a mortal life is shoved into an asylum and treated for Beforelife Delusion.

This raises a question. Should you read the first story, Beforelife, before dipping into this one? A short answer is “no”. A slightly longer answer is “yes”. But another answer, and an altogether more correct one, is that it depends on what you want to get out of this book. Having read the previous paragraph you know all you need to know in order to string along with the story of Afterlife Crisis. You’ll realize that many of the characters in the book are historical figures who now live in the world of Detroit without remembering who they were in the mortal world. You’ll know why humans in Detroit are immortal — able to recover from any injury or illness — and why they cringe at the very thought of human mortality. You’ll understand that the people of Detroit fail to realize the true nature of their world, and that the people being treated for Beforelife Delusion are the only ones who get what’s going on.

There are other mysteries, though, that you’ll have a better chance of piecing together after reading both books. Who is Abe, the all powerful leader of Detroit? Why are some people in Detroit, like Abe, able to reshape the world to suit their whims? Why does Rhinnick Feynman, the narrator of Afterlife Crisis, believe he’s a character in a novel being penned by a cosmic Author? Why do some people reincarnate? Why does Rhinnick’s pal, Zeus, seem to believe that he was a Yorkshire terrier when he lived in the mortal world? And why are there so many Napoleons cluttering up the scenery? Clues about these (and other) mysteries are liberally besprinkled throughout both books. And while you’ll be able to piece many of them together by reading Afterlife Crisis on its own, those who really enjoy detective work might have a lot more fun by sifting through two volumes filled with intersecting clues.

For what it’s worth, my mother can’t imagine why anyone wouldn’t want The Collected Works, so she suggests that you head to the bookshop and complete the set right now.

“Fans of wacky doings and zippy dialogue are sure to be entertained.” — Publishers Weekly

“When I worked with Randal Graham at the Goodmans law firm he showed few signs of zaniness, let alone P.G. Wodehouse on steroids. But zounds he shows all of the above and more in the story of Rhinnick and Vera. We are all better for The Other Side of Randal.” — Bob Rae, 21st Premier of Ontario and author of From Protest to Power

“Randal Graham has written an inventive and hilarious tale packed with such witty prose that P.G. Wodehouse is surely applauding from his own afterlife. Strap in for a wild and funny ride.” — Terry Fallis, two-time winner of the Stephen Leacock Medal for Humour

“Like Terry Pratchett’s Discworld and Douglas Adams’ entire Galaxy, the post-death realm of Randal Graham’s Detroit is a zany mélange of puns, incisive social commentary, dry wit, and more plot twists that you can reasonably waggle your stick at. I don’t claim to know what will happen after my expiration date, but considering how terrible real life is of late I dearly hope my afterlife will be as enjoyable as Detroit.” — Corey Redekop, author of Husk

Other titles by Randal Graham