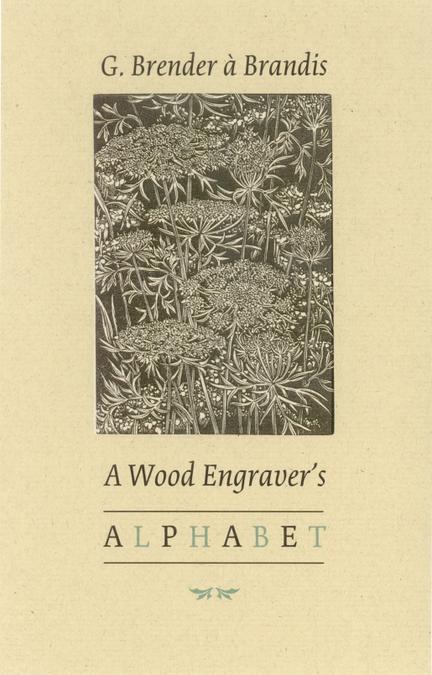 An elegant little alphabet book for adults using original wood engravings of flowers to represent each of the twenty-six letters. Uniform in format with the bestselling Wood, Ink & Paper (Porcupine's Quill, 1980).

A member of the Society of Wood Engravers (England), Gerard Brender — Brandis has produced hundreds of drawings, wood engravings and watercolours of flowering plants, many of which were studied in his own garden. These images have appeared in books, including Wood, Ink and Paper, At Water's Edge and Portraits of Flowers (all published by The Porcupine's Quill) as well as in his own handmade editions. His work is represented in the collections of the Royal Botanical Gardens (Hamilton, Ontario), the Missouri Botanic Garden, the Arnold Arboretum and the Hunt Botanical Library. His garden and his studio are located in Stratford, Ontario.

'The engravings are so rich, so densely cut, that looking closely at the engravings one feels drawn into the pictures as if entering a forest, a forest of detail. Coming to the Foxglove, I felt as if I had entered a clearing and there stood the flower, totemic in its beauty.'

'I have been flipping for the past month through the Wood Engraver's Alphabet by one of Canada's great engravers, G. Brender — Brandis, and with each pass through find some nuance or detail that I had missed and am charmed all over again by this beautiful little collections of engravings published by the Porcupine's Quill.'

'Gerard ... sees himself in the longer tradition of medieval scribes and Gutenberg, and most of his important connections are with artists and craftsmen of Europe and the past. His engraving is very much in the British tradition, with the feel of such engravers as Mackley, Robert Gibbings, Joan Hassall and Monica Poole.... In Gerard's case, being a book artist includes being able to do all aspects of the production himself. No other Canadian private press printer is able to combine typesetting and printing with wood engraving, papermaking, spinning, weaving and bookbinding. His lifestyle, which is spare and simple, imposes the onus of inventing and doing everything self sufficiently and provides the opportunity to explore his creativity as fully as possible.'

Multiples, the Journal of the Society of Wood Engravers

'The prints themselves are beautifully intricate portraits. Emerson said ''In every work of genius, we recognize our thoughts. They come back to us with a certain alienated majesty.'' Brandis has made the familiar flowers new, beautiful. They're rendered devoid of their usual color but with a greater richness and texture.'

'Wood engraver Gerard Brender — Brandis has long been an avid gardener and botanist; his encyclopaedic knowledge of the plant world animates the exquisite microcosm of this collection, intended both for the student of the complexities of nature's creations and the patron of the intricate art of wood engraving.'

A Gathering of Flowers from Shakespeare

Illustrated Books from The Porcupine's Quill