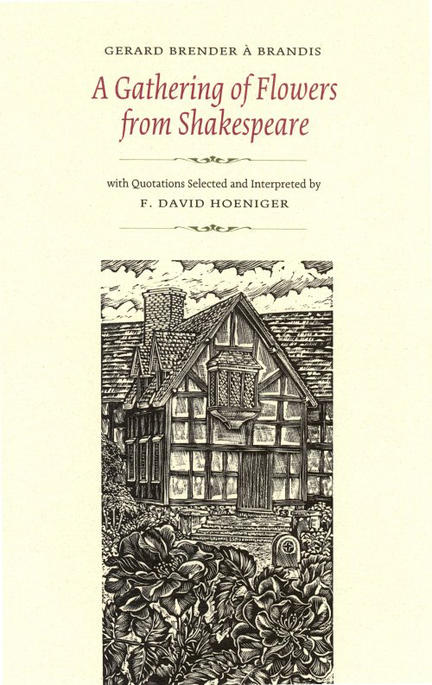 `Gerard Brender — Brandis is a renowned wood engraver, whose works of densely textured intricacy vibrate across your vision, drawing you into a microscopically magic world.`

A member of the Society of Wood Engravers (England), Gerard Brender — Brandis has produced hundreds of drawings, wood engravings and watercolours of flowering plants, many of which were studied in his own garden. These images have appeared in books, including Wood, Ink and Paper, At Water's Edge and Portraits of Flowers (all published by The Porcupine's Quill) as well as in his own handmade editions. His work is represented in the collections of the Royal Botanical Gardens (Hamilton, Ontario), the Missouri Botanic Garden, the Arnold Arboretum and the Hunt Botanical Library. His garden and his studio are located in Stratford, Ontario.

F. David Hoeniger is professor emeritus from Victoria College, University of Toronto, where he taught for many years in the Department of English. He is also a former director of the university's Centre for Reformation and Renaissance Studies. Professor Hoeniger is the author and editor of numerous works on Shakespeare, his work and his times, including Medicine and Shakespeare in the English Renaissance (1992), and Science and the Arts in the Renaissance (edited with John W. Shirley, 1985). His editions of Shakespeare include the Arden Pericles (1963) and the Penguin version of King Henry the Eighth (1966). Professor Hoeniger lives in Toronto.

`This dandy little book is a selection of Shakespeare's flower and plant imagery, accompanied by the Brandis engravings -- which were originally produced from endgrain wooden blocks and hand-printed on an 1882 Albion press for a limited edition of 97 copies in 1997. The text, which presents brief ``quotations`` from Shakespeare selected and explained both symbolically and botanically by Hoeniger, is not just a vehicle for the artwork but is pleasantly informative. You`ll find out, for instance, what Hamlet's Gertrude had in mind when she alluded to the ``grosser names`` for the roots of the purple orchid: priest's pintle (you got it right the first time), dogstones and goat's cullions (cujones). You don't have to be biased, like me, to see at a glance that A Gathering of Flowers from Shakespeare is a perfect little gem, ideal for lovers of wood engravings, flowers, printmaking or even just Shakespeare.`

`I have for years daydreamed about planting and tending a Shakespeare garden: a garden that would boast every flowering plant mentioned in Shakespeare's poems and plays. I assure you, this is not a solitary, invented obsession. Hundreds of public and countless private Shakespeare gardens exist around the world, one of the most famous at the Huntington Library in California, and these extraordinary gardens offer the twin pleasures of Shakespeare's art and Nature's beauty.

`Gerard Brender — Brandis, and F. David Hoeniger's A Gathering of Flowers from Shakespeare is a truly beautiful companion to my daydreams. And if you also love beautifully constructed books and the stark power of wood engravings, you will find yourself flipping through this well-conceived and artfully constructed book again and again.`

`Brender — Brandis` delicate illustrations evoke tremendous texture for a medium as difficult as wood engraving, and have a wild, almost Art Nouveau quality.`

`Gerard ... sees himself in the longer tradition of medieval scribes and Gutenberg, and most of his important connections are with artists and craftsmen of Europe and the past. His engraving is very much in the British tradition, with the feel of such engravers as Mackley, Robert Gibbings, Joan Hassall and Monica Poole.... In Gerard's case, being a book artist includes being able to do all aspects of the production himself. No other Canadian private press printer is able to combine typesetting and printing with wood engraving, papermaking, spinning, weaving and bookbinding. His lifestyle, which is spare and simple, imposes the onus of inventing and doing everything self sufficiently and provides the opportunity to explore his creativity as fully as possible.`

Multiples, the Journal of the Society of Wood Engravers

`The passage of four centuries certainly adds to the challenge of identifying species from common names. What flowers did Shakespeare have in mind when he spoke of love-in-idleness, eglantine, herb of grace or long purple” By answering many such intriguing questions, this book enhances the reader's understanding of, and appreciation for Shakespeare's works.`

`Brender — Brandis` skillful descriptions of the structures of various species of plants and flowers invite close study. Each print is loaded with intricate visual information and captivates the viewer with a rich interplay of negative and positive space. There are often structures in the prints which, when followed, recall Celtic knots which move in, out and around.`

`A Gathering's juxtaposition of name, image, history and poetic resonance work to (re)introduce a materiality into botanical language that may be missing for the urban reader. As we read, one by one, gradually a broader effect accumulates: a sense of the vibrant link between the floral world and language's turn to it for expression of abstract emotional experience, and a sense of the currency, accessibility and popular consciousness of that link within Elizabethan era expression.

`I was not expecting such an experience: I had anticipated a largely cerebral and the (merely) specular pleasure of a pretty display of flowers counterpointed with pretty poetic accompaniments. But reading the book in one sitting (easily done within an hour or two) surprised me by accessing my love of language through syllables that I had not thought could ever move me. Names like columbine, cowslip and flax had generally produced in me only stirring apprehensions of ``flower`` or `'seed``; now these words are for me reinvested with not only their early symbolisms but with a situation in language I still find affecting and with shape. Though at first I found the black ink of each woodcut limiting, I gradually came to appreciate the focus on shape that the limit forced, as it trained my eye to the shape of each petal and leaf, rather than to the easy distinguishment through colours, in order to know a word as a particular flower.`

Other titles by David Hoeniger

Illustrated Books from The Porcupine's Quill