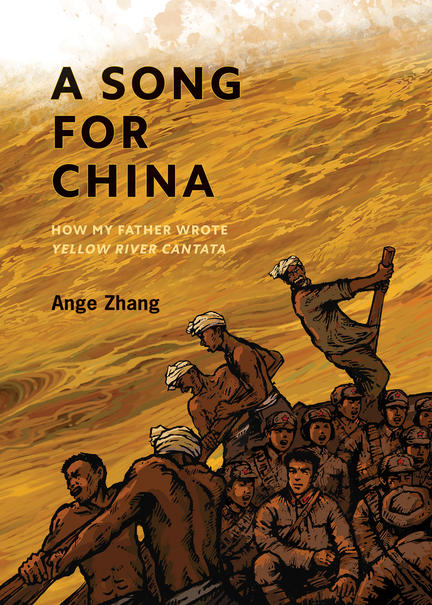 Published in celebration of the famous Yellow River Cantata’s 80th anniversary, this is the riveting history of how a young Chinese author and passionate militant fought using art to create a socially just China during the period of the struggle against the Japanese and during World War II.

This is the fascinating story of how a young Chinese author, Guang Weiran, a passionate militant from the age of twelve, fought, using art, theater, poetry and song, especially the famous Yellow River Cantata — the anthem of Chinese national spirit — to create a socially just China. Set during the period of the struggle against the Japanese and the war against the Kuomintang in the 1920s and ’30s, this book, written and illustrated by Guang Weiran’s award-winning artist son, Ange Zhang, illuminates a key period in China’s history. The passion and commitment of the artists who were born under the repressive weight of the Japanese occupation, the remnants of the decaying imperial order and the times of colonial humiliation are inspiring.

Zhang’s words and wood-block style of art tell us the story of his father’s extraordinary youth and very early rise to prominence due to his great talent with words. We see and hear the intensity of what it meant to be alive at such a significant moment in the history of China, a country that understands itself as the heir to one of the greatest civilizations the world has ever known. The humiliations and social injustice the Chinese people had endured in the colonial period were no longer bearable. And yet there were major factional differences between those who wanted to create a modern China. Ange’s words and art paint the picture for us through his father’s story, accompanied by sidebars that explain the historical context.

The book ends in a burst of glorious color and song, with the words of Yellow River Cantata in Mandarin, as well as newly translated into English. This great song turns eighty years old in 2019, and will be sung and performed by huge orchestras and choirs around the world, as the Chinese diaspora has embraced the cantata as its own.

CCSS.ELA-LITERACY.RI.6.2
Determine a central idea of a text and how it is conveyed through particular details; provide a summary of the text distinct from personal opinions or judgments.

CCSS.ELA-LITERACY.RI.6.6
Determine an author's point of view or purpose in a text and explain how it is conveyed in the text.

CCSS.ELA-LITERACY.RI.6.7
Integrate information presented in different media or formats (e.g., visually, quantitatively) as well as in words to develop a coherent understanding of a topic or issue.

ANGE ZHANG has illustrated many books for Groundwood, most notably his memoir of growing up during the Cultural Revolution, Red Land, Yellow River, which won the Bologna Ragazzi Award. A former designer for the National Opera Theater in Beijing, he now works as an animation artist. He lives in Toronto.

A Song for China is a dense, masterful work, ideal for rich discussions about art and culture, war and politics.

Other titles by Ange Zhang

A Story from the Cultural Revolution

To the Mountains by Morning /hc