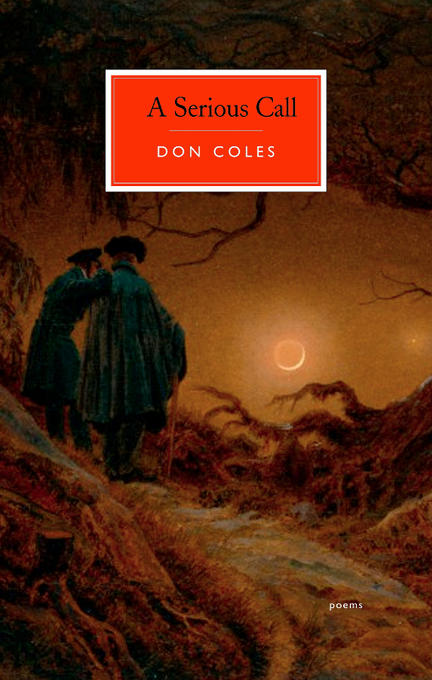 In his latest book of poetry, A Serious Call, Don Coles brings to life a series of everyday moments, objects, and relationships in a touching reflection on the passage of time and the power of memory.

To my newborn grandson

There was usually a warning. "If you're
So set on it", my Gramp would be told, "go ahead.
But keep in mind he's just a little boy."
That was Gran. While she was talking
He'd be studying whatever piece of wall
He was nearest to, or adjusting his hat,
The straw one with the black band
Around the bottom of the crown. Then
Out the cottage's back door we'd both go,
Him carrying the two-hander.

It was shaped like a harp. This is
Seventy years later, a long while for
A simile's slow glow to be mounting
Towards a page's, this one's, surface, but
The saw's shape never wavered.
It hung on pegs on the wall in
The entry-way, and only came down
Once or twice a summer.

The simile's stronger for the wait.

Its wooden handles were painted crimson,
A dried-blood colour, as I didn't always know.
They were the smoothest things of wood
I've ever held. My hands clench,
Remembering them.

He didn't say much, my Gramp. But
I'd catch him watching me
When we were out there, the two of us
Standing in a pine-tree wood
On a yellowing pine-needle floor, and
Along with the watching there'd sometimes be
An awkwardness in him, something unsure or shy,
Glimpses of all those, which may just have been
What could he do about the years,
Such a jumble when he turned to
Look back?the imbalance between us that
Words wouldn't fix. And meanwhile
My arms would be stretching out towards him
When the saw moved in that direction,
And then they'd be pushed back until they were
Almost behind me, and then further forward again,
And everything repeating.

When the log started to tilt downwards at
Its middle, meaning it was about to break into
Its two new halves, you had to stop right away
And lift the blade up and out. I'd probably have
Taken my T-shirt off by then, and now I'd
Pick it up and throw it over my shoulder.
We'd walk to the stream where, years and years
Ago, he'd stuck a V-shaped length of tin tightly
Among the stream-bed's stones. A small saucepan
Was half-hidden among the weeds and he'd fill this
From the water running as from a tap out of
The front of the V-shaped tin. He'd watch
The water settle and clear in his pan and then
Drink all he wanted and rinse the pan out before
Passing it to me. I'd do what I'd watched him do.

All this comes from the two-handed saw which
I'm remembering as much of as I can, only
Because of you, little one, resting among us
In your dream of Eden, and a lot smaller
Than I was then, whose dream never showed
The two of us in a wood together, as we will never be.

'In his wistful look at life, Coles captures sounds and movements of time and space, from vastness to nesting.

'Instead of writing poems that you have to fight your way through, or that actively discourage engagement, [Coles's] lines open themselves up to you as you read, and then remain in your mind, enriching your perception of your own relationships and experiences.'

'In his wistful look at life, Coles captures sounds and movements of time and space, from vastness to nesting.

'"Aschenbach in Toronto," the indisputible highlight of this short collection, demonstrates that at 88 years of age, Coles's talent remains undiminished.'

'The memory that stands at the core of "A Serious Call"?two co-workers in the back room of a bookstore with their boots up on the coffee table, only a space heater for warmth, speaking aloud to each other the lines that must be shared?is only the most elegant of many examples. Here we have the memory of the page being spoken aloud one friend to the other as an inspiration for further writing and further memory and further friendship too, because the remembering of the page is a call that only finds its answer in the response of the friend.

Though my own experience of page and memory and friendship was formed in far different circumstances, I can recognize in Coles' description an undeniably correlate experience, as powerful and as valuable a thing?this friendship of the remembered page*mdash;and as any human experience.

'Don Coles is quickly becoming one of my favorite poets. His precise words often move me to tears. I'm always impressed by his multi-cultural and multi-lingual erudition, nevertheless expressed in the simplest possible terms.'

'A Serious Call is the most accomplished and assured collection I have read by Don Coles. Coles' subject matter and style have always been something of anomaly, especially to poetry audiences in Canada, and Coles seemed always to be self-conscious of this. In A Serious Call, the book and poems are remarkably pared down, yet the voice is very full and rich, very varied; and the music is quite good.... Coles' powers are very much at their summit in this book. I am in awe of this book. I cannot recommend it enough, un-selfconscious and very endearing.'

A Serious Call is a quiet, beautifully rendered story of our relationships to objects, books, and (the memories of) the people around those objects and books. The volume ultimately casts a charming reflection on time and aging; for the literary devotee, it shouldn't be missed.