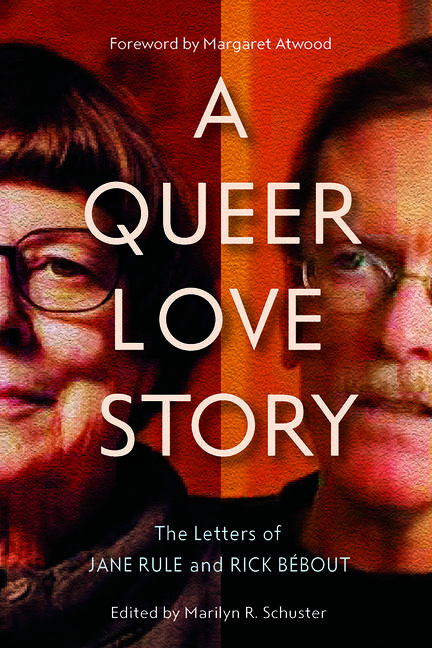 A Queer Love Story presents the first fifteen years of letters between Jane Rule – novelist and the first widely recognized “public lesbian” in North America – and Rick Bébout, journalist and editor with the Toronto-based Body Politic, an important incubator of LGBT thought and activism. Rule lived in a remote rural community on Galiano Island in British Columbia but wrote a column for the magazine. Bébout resided in and was devoted to Toronto’s gay village. At turns poignant, scintillating, and incisive, their exchanges include ruminations on queer life and the writing life even as they document some of the most pressing LGBT issues of the ’80s and ’90s, including HIV/AIDS, censorship, and state policing of desire.

Marilyn R. Schuster was the Andrew W. Mellon Professor in the Humanities at Smith College and has been professor and provost emerita since 2015. Her research and writing focuses on contemporary writers such as Jane Rule, Marguerite Duras, and Monique Wittig, and she is the author of Marguerite Duras Revisited and Passionate Communities: Reading Lesbian Resistance in Jane Rule’s Fiction. She lives in Oakland, California.

Rick Bébout was the editor of the hugely influential Body Politic, “the magazine of record for the activities and development of the gay liberation movement across the country.” He was born in Ayer, Massachusetts, and came to Canada at age nineteen in 1969. He died in Toronto in 2009.

Jane Rule was born in Plainfield, New Jersey and moved to Canada in 1956. She died at her home on Galiano Island in 2007 at the age of seventy-six. She was inducted into the Order of British Columbia in 1998, and into the Order of Canada in 2007. She wrote fourteen books, including Desert of the Heart (1964), which was turned into the movie Desert Hearts.

These smart, deeply felt missives constitute a more than 600-page archival record and reference tool. Enhanced by an excellent index, A Queer Love Story will be invaluable to those interested in the history of the queer movement in Canada as viewed by two of its most thoughtful, lifelong participants.

Reading a collection of letters can be something of a guilty pleasure. Marilyn Schuster’s edition of the letters of Jane Rule and Rick Bébout, by contrast, is a moving experience, deftly mingling genres of memoir, diary, and essay. Though reduced by three-quarters from the carefully chronologized 2700-page collection both correspondents agreed to present to the editor, covering fifteen eventful years of their correspondence (1981-1995), A Queer Love Story offers a deeply personal view of academic and publishing life from two of Canada’s leading gay authors.

... a fin-de-siècle dialogue of bicoastal and pan-Canadian sensibilities, A Queer Love Story is a tribute to exemplary citizenship and the ethics of personal responsibility in times of crisis.

In an era when tweets, texts, and e-mails have surpassed the art and practice of letter-writing, this volume will delight historians of the LGBTQ movement and everyday readers.

It is a pleasure and a privilege to “watch” their friendship grow. I highly recommend A Queer Love Story.

It is a joy reading this correspondence that allows us to truly get to know these two powerhouses of contemporary LGBT history, and to see how they grew as people due to the exchange of ideas and experiences that they shared with each other.

A Queer Love Story is a wonderful book full of daily life's details, notes on the writing process, and commentary on gay and lesbian issues. It will introduce younger readers to two exemplary members of the gay community ... I felt privileged to be in the presence of these two gifted, courageous writers, both of whom left the U.S. for Canada when they were young. Imagine a book of 600 pages that seems to end too soon. Will we ever again, in this age of texting, have such a lively, spirited, and revealing correspondence?

A Queer Love Story … encompasses a quintessential period for the queer community in Canada … What emerges is not merely an engaging portrait of two provocative thinkers, but a snapshot of a period in Canadian history that saw a seismic change in the lives and attitudes and ideas of the nation’s queer community.