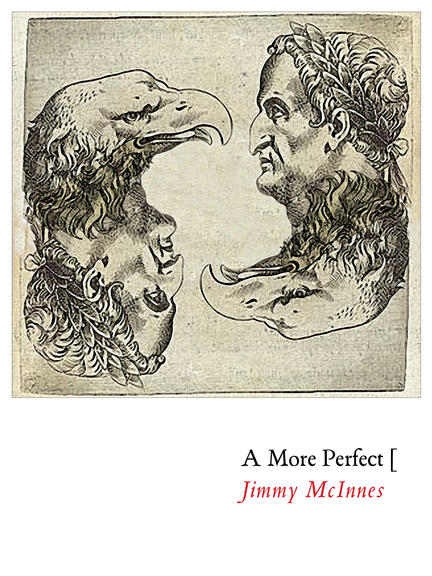 Iconic political speeches are some of the best remembered and most repeated passages in contemporary English language. Especially in the United States of America, what child doesn't know Abraham Lincoln's "Fourscore and seven years ago..." or Roosevelt's "The only thing we have to fear..."?

Taking as its source text Barack Obama's campaign speech from March 18, 2008, A More Perfect [ by Jimmy McInnes acts as a poetic translation of the rhetorical devices often used in political speeches. Like poetry, the campaign speech depends heavily upon the manipulation of language--the ways in which words are able to strategically twist intention and distract the eye. McInnes's poetry exposes the inner workings of the political speech, as a genre of text as premeditated as any work of poetry or fiction.

A More Perfect [ blends both political and formal linguistic concerns, garnering comparisons to Jena Osman's Corporate Relations and Alice Oswald's Memorial in their negotiation of source texts. Readers with an interest in language, linguistics, and rhetoric, and those with a particular interest in political themes and formal innovation, will relish this entertaining and culturally poignant read.

Jimmy McInnes was born and raised on Ontario's Bruce Peninsula. His first chapbook, Begin Speech With, was released by Ferno House in the fall of 2013. His poetry has appeared in various journals, including This Magazine, ditch, The Puritan, Descant, and the Capilano Review Web Folio. His work has been shortlisted for the Great Canadian Literary Hunt, and the Robert Kroetsch Award for Innovative Poetry. He lives in Toronto, where he completed his MFA in Creative Writing at the University of Guelph, and is currently employed as a political hack. A More Perfect [ is his first book-length work of poetry. Connect with McInnes on Facebook at https://www.facebook.com/jimmymcinnes or Twitter @JimmyMcInnes.

Priase for A More Perfect [

Barack Obama's eloquent and iconic 2008 speech on race, "A More Perfect Union," is the master text underlying Jimmy McInnes's ingenious poem. In the course of laying bare the devices of political rhetoric, McInnes presents an intricate lattice of tropes, formulas, gestures, and contexts. A More Perfect [ reads like a performance theory handbook, a poet's theater script, and a grammar manual, all rolled into one concatenating barrel of tricks. --Charles Bernstein

We know language is littered with heinous tools to obscure, evade, and punish. Through passive euphemism and doublespeak, malapropism and catachresis and plain old gibberish, those who wield power--our politicians, advertisers, reviewers, friends--use words to fill space, making noises without referents, all according to comforting pattern and script. Why are we so shocked, red-faced, to see the scaffolding? McInnes tears away the colour and flesh of distraction to show all that spooky structure--the rehearsed rhetoric of those who lie for a living (we the 99 percent). When he reads this book live, he infuriates, galvanizes, but who can deny the concurrent sparkle of a language stripped to its constituents? Never have noun, verb, adjective held so much basic, mesmerizing radiance. It's still ours, after all. Take it back.
--Spencer Gordon

According to Thomas Hobbes (via Rachel Zolf's Neighbor Procedure), power is the "capacity to give names and enforce definitions." Jimmy's reverse rhetorical procedure on President Obama's speech does two things: first it demolishes the monologic power of the spectacle and then it returns that power (now made dialogic) to the people, to the demos, and to language itself, by inviting us to participate in his gleeful and meticulous parsings. A More Perfect [ is a gift of open form.
--Mat Laporte