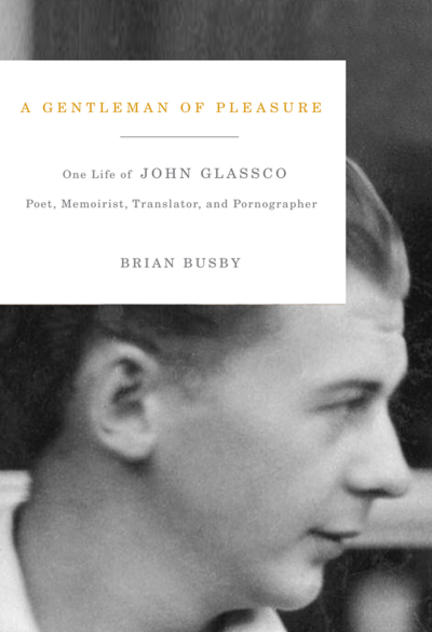 A Gentleman of Pleasure not only spans Glassco's life but delves into his background as a member of a once prominent and powerful Montreal family. In addition to Glassco's readily available work, Brian Busby draws on pseudonymous writings published as a McGill student as well as unpublished and previously unknown poems, letters, and journal entries to detail a vibrant life while pulling back the curtain on Glassco's sexuality and unconventional tastes. In a lively account of a man given to deception, who took delight in hoaxes, Busby manages to substantiate many of the often unreliable statements Glassco made about his life and work. A Gentleman of Pleasure is a remarkable biography that captures the knowable truth about a fascinatingly complex and secretive man.

Brian Busby is Ricochet Books’ series editor. He is the author of A Gentleman of Pleasure: One Life of John Glassco, Poet, Translator, Memoirist and Pornographer (McGill-Queens UP, 2011) and editor of The Heart Accepts it all: Selected Letters of John Glassco (Véhicule, 2013).

"In his own elegant prose and with a profound appreciation of his subject's life and work, Brian Busby introduces us to the life, the times, and the writings of a man who was not merely a gentleman of letters and pleasure but also a fabulist of the first order. Busby's treatment and analysis of Glassco's best-known work, the controversial Memoirs of Montparnasse, should lay to rest any questions still surrounding its composition. Read this book too for an exceptional and intimate gaze into the life and times of a pioneering translator of Franco-Québécois writers into English; an award-winning poet; and a noteworthy author of literary pornography. All combine quite comfortably to make A Gentleman of Pleasure a tremendously good and satisfying read." Sheila Fischman, literary translator

"Black-leather dandy, and elegant, martini-sipping beat, John Glassco was a one-man, literary underground. Impeccable in style and provocative in intent, his pornography is poetic, his poetry is arty, but all his writing has the precision and grace of beautiful lies. Yet, his genius has gone too long unheralded and unsung in his native land. Bravo to Brian Busby, then, whose exhaustively researched, exquisitely written, and endlessly interesting biography reveals Glassco's vivid complexity, intricate deceptions, and the convoluted genesis of his deathless triumphs in memoir, translation, lyric, and, yes, his odes to the joys of womanly sadism and boyish masochism. Busby gives us a detailed portrait of a grand bon vivant and a singular intellectual, who was likely English Canada's most gifted, truly radical writer." George Elliott Clarke, Department of English, University of Toronto

"Original and richly detailed, A Gentleman of Pleasure gives John Glassco the audience he deserves." Andrew Lesk, University of Toronto

Other titles by Brian Busby

The Damned and the Destroyed

Damned and The Destroyed, The

A Journey Through Canada's Forgotten, Neglected, and Suppressed Writing

The Mayor of Côte St. Paul

The Mayor of Côte St. Paul

All Else Is Folly

A Tale of War and Passion

The Heart Accepts it all

Who's Really Who in CanLit