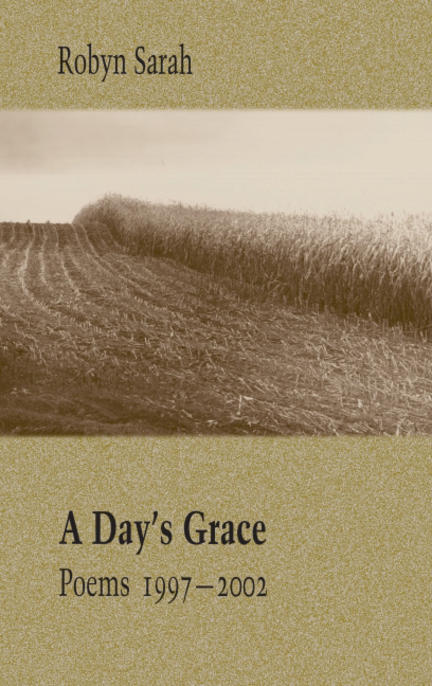 So assured and musical is the hand that shaped them that these poems tend to memorize themselves, as though they had always formed part of our experience.

Robyn Sarah
Is the author of several poetry collections, two collections of short stories, and a book of essays on poetry. Her works have appeared widely in Canada and the United States, in publications that include The Malahat Review, The New Quarterly, The Bedford Introduction to Literature, The Norton Anthology of Poetry, and Garrison Keillor's Good Poems for Hard Times. Widely recognized and anthologized, Robyn Sarah has won awards for each of the genres in which she works, including the 2015 Governor General's Literary Award for poetry and the CBC literary competition, also for poetry; a National Magazine Award, and the QSPELL award for the best English-language fiction written by a Quï¿½bec author. She lives in Montrï¿½al.

'Reading A Day's Grace, it is easy to understand why Sarah has not been widely embraced as one of Canada's pre-eminent poets. Her work is quiet and thoughtful, and readers must possess the patience to unwrap and examine her ''spots of time'' slowly. Those readers who do so will be rewarded.'

'Remarkably, Sarah's calm and deliberate diction manages to avoid the assured, all-knowing tone that the lyric voice often risks as it describes. Persuasiveness here comes from a steady gaze, not an authoritative stance. If anything, Sarah likes to move into places of unknowing, preferring to dwell in pockets of conundrum until they feel safe. Sarah goes to her desk to ask some difficult questions, such as whether writing poetry is in fact ''acceptable'' work in God's eyes. Her uncertainty is a refreshing change from the often-insisted obviousness of poetry's worth, which Sarah advocates simultaneously by the sheer volume of her work. In fact, Sarah's arguments are the more compelling for her inclusion of self-doubt and shortcomings -- note the support that resides in her admission to her daughter, ''These are your woods. They are not mine at all.'' '

'The book's title is taken from ''A Solstice Rose,'' in which the narrator buys a day's grace for a wilting rose, by propping it up so it will last a bit longer. These poems have been sifted through the conscience of a poet familiar with tradition and craft, rhyme and metre. Although Sarah does not always use these in an obvious manner, they are evident. In a recent interview on the web site poetics.ca, Sarah says she doesn't see herself as a ''formalist,'' but she has nonetheless studied to make each poem have ''a pattern or a perceptible relation of its parts to one another.'' Her music background lends itself well to poetry that uses repetition, metre and various kinds of rhyme. In the same interview, Sarah says, ''To me, a poetic form is a word dance. A prescribed set of formal moves, involving sound and/or sense. It is graceful play with language, a graceful invention to be passed from hand to hand.'' '

'Two threads form the warp and woof of this luminous collection: a mother's estrangement from a daughter in her twenties and the darkening of our days as glimpsed each night on the evening news ... ''death has begun to tug at our clothes / like a child demanding to be noticed''. In the midst of personal and public wars, these poems glisten and glimmer like small lamps, like isolated stars: ''little glints of hope that keep us going''.'

'A Day's Grace is an apt title for this new collection by Canadian-American poet Robyn Sarah, who writes in ''Bounty,'' ''Make much of something small.'' Her exquisite poems are worth making much about for their lyrical precision, indeed their wisdom. Sarah can write well in any form, including prose and free verse, but her most appealing poems are those in which quiet wordplay flirts with formal rigor? [Her poems] give me that much-sought-after feeling that I'm in the hands of a real poet rather than one of the slap-dash whiners who make most of the noise these days. My pleasure grows as I turn the pages of this collection, finding various kinds of grace in nearly every poem. She offers domestic moments reminiscent of Rachel Hadas and Emily Grosholz, but also, like them, a larger intellectual vision. Plenty of poets have written about history, faith, and family life, but few contemporaries have done it with such grace.'

Other titles by Robyn Sarah

Wherever We Mean To Be

My Shoes Are Killing Me

A Decade's Thoughts on Poetry

Questions About the Stars