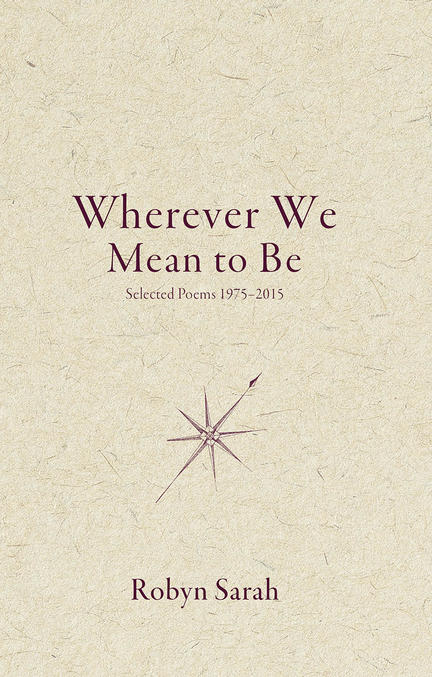 A four-decade retrospective from the winner of the 2015 Governor General's Literary Award for poetry.

Spanning forty years and ten previously published collections, Wherever We Mean to Be is the first substantial selection of Robyn Sarah’s poems since 1992. Chosen by the author, the 97 poems in this new volume highlight the versatility of a poet who moves easily between free verse, traditional forms, and prose poems. Familiar favourites are here, along with lesser-known poems that collectively round out a retrospective of the themes and concerns that have characterized this poet's work from the start.

Warm, direct, and intimate, accessible even at their most enigmatic, seemingly effortless in their musicality, the poems are a meditation on the passage of time, transience, and mortality. Natural and seasonal cycles are a backdrop to human hopes and longings, to the mystery and grace to be found in ordinary moments, and the pleasures, sorrows, and puzzlements of being human in the world.

Robyn Sarah
Is the author of several poetry collections, two collections of short stories, and a book of essays on poetry. Her works have appeared widely in Canada and the United States, in publications that include The Malahat Review, The New Quarterly, The Bedford Introduction to Literature, The Norton Anthology of Poetry, and Garrison Keillor's Good Poems for Hard Times. Widely recognized and anthologized, Robyn Sarah has won awards for each of the genres in which she works, including the 2015 Governor General's Literary Award for poetry and the CBC literary competition, also for poetry; a National Magazine Award, and the QSPELL award for the best English-language fiction written by a Quï¿½bec author. She lives in Montrï¿½al.

PRAISE FOR WHEREVER WE MEAN TO BE

“A poem by Sarah could fit into the palm of your hand ... Wherever We Mean To Be showcases [her] gifts: her visual clarity, no-nonsense voice, compressed language, rhythmic prowess, and metaphoric agility. These qualities speak from a long-cultivated focus and bespeak a writer who pays fierce attention to the basic fact of being in the world." —Anita Lahey, The Walrus

“This city, read by a kind of hidden code, seems lost in time; lives lived in its outmoded rooms have a timeless quality...the voice remains utterly its own, in pursuit of what Sarah calls “the lost soundtrack of daily life.” —Canadian Jewish News

“So assured and musical is the hand that shaped them that these poems tend to memorize themselves, as though they had always formed part of our experience.” —Eric Ormsby

“The cool delight of her poetry is to turn those subjects of routine forgetfulness into words that quiver in the heart... Sarah knows the language: its pressure points, its traditions, its crevices. Trained as a musician, she also understands flow and timing, when to sing and when to keep silent.” —Montreal Gazette

Other titles by Robyn Sarah

My Shoes Are Killing Me

A Decade's Thoughts on Poetry

Questions About the Stars