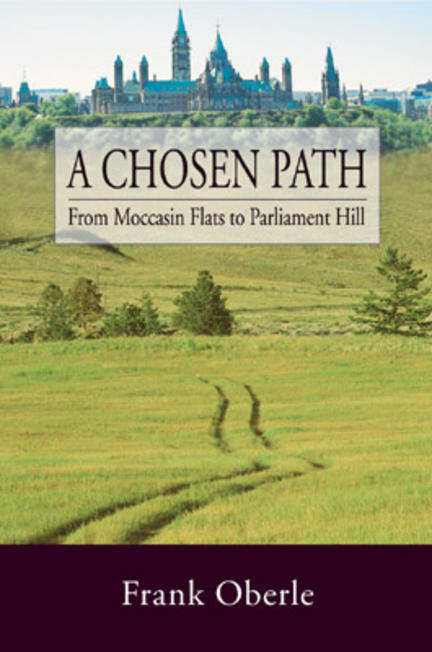 In A Chosen Path, Frank Oberle continues the amazing story of his remarkable rise from self-educated immigrant to national politician and Cabinet minister.

The bestselling first volume of Frank's autobiography, Finding Home, recounted his turbulent youth in Nazi-run Germany and his post-war immigration to Canada. After working for a year and a half—as a baker, logger and miner—he earned enough to bring his future wife, Joan, from their homeland. They eventually settled in the brand-new community of Chetwynd, BC, where he began his political life as a village councillor and later became mayor.

In A Chosen Path, we travel with Frank to Ottawa after his election to the House of Commons in 1972 and follow his six-term political career, which culminated in his appointment to Cabinet in 1985—first as Minister of State for Science and Technology, then four years later as Minister of Forestry. On the way, we are treated to incisive, often witty, behind-the-scenes looks at the politicians and issues of the day, along with Frank's straight-shooting assessments of our national leaders and the prime minister's office.

Now a thoughtful observer more than a decade removed from that maelstrom of machinations that is Canada's capital, Frank sheds light on what is right and what is wrong in our political world.

Born in Forchheim, Germany, Frank Oberle survived the turmoil of HitlerÃ­s Germany and post-war chaos before immigrating to Canada in 1951. During his career he tried his hand at many jobs, including logger, gold miner, rancher and town mayor, before serving six consecutive terms as a member of Parliament. In 1985 Frank became CanadaÃ­s first German-born federal Cabinet member when then prime minister Brian Mulroney made him minister of state for science and technology. Four years later, as minister of forestry, his determination led him to confront the industryÃ­s clear-cutting practices and demand sustainable forest management. He received the Canadian Forestry Achievement Award in 1992 and was a founding member of the Canadian Institute for Advanced Research.

Frank lives near Nanoose, BC, with his wife, Joan. They have four children and seven grandchildren.

Other titles by Frank Oberle

A War Child's Journey to Peace