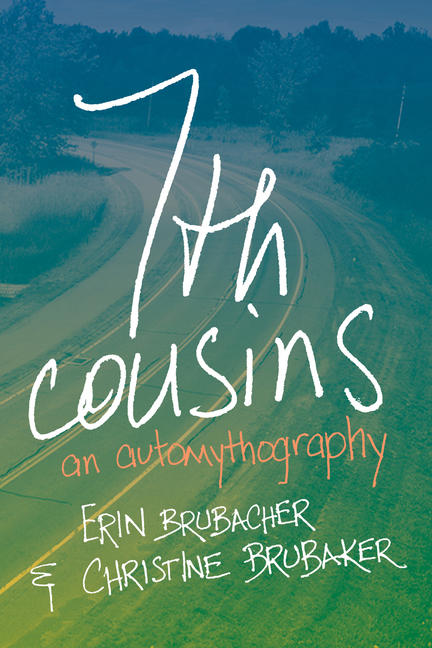 From July 7th to August 6th, 2015, we walked 700 kilometres, from Pennsylvania to Ontario. A stranger asked if we were walking to learn how to work and be together. This was certainly part of it.

In July 2015, Erin Brubacher and Christine Brubaker, two politically left, secular, Canadian women traced the migration route of their Mennonite ancestors by walking from Pennsylvania to Ontario, through the American Bible Belt. Along the way they were hosted by a series of people with whom they had next to nothing in common. They were welcomed into strangers' homes and treated as family. On their journey they encountered folks with religious and political beliefs very different from their own and learned to question what conversations to enter and how far to take them. They accomplished this and so much more while navigating their own relationship and the challenges of being with another person, on foot, for 32 days. 7th Cousins: An Automythography documents the walk itself and the performance text they generated afterwards. Included throughout are photo essays from the journey and commentaries from their collaborators Christopher Stanton, Andrea Nann, Kaitlin Hickey and Erum Khan.

"7th Cousins is a sharp, very personal and insightful work of documentary theatre that embodies a kind of honest female friendship that is so important to experience in our current moment, as well as a journey into the U.S. that gives trenchant insights far beyond what I was expecting." —Jacob Wren, author of Authenticity is a Feeling: My Life in PME-ART and Rich and Poor

Erin Brubacher is a multidisciplinary artist. Her first book of poetry, In the small hours, was published in 2016. Recent theatre projects include: Noor, written by Erum Khan with live music by sitarist Anwar Khurshid and the electronic music duo LAL; the award winning Brubacher/Spooner/Tannahill production of Concord Floral; and Kiinalik: These Sharp Tools, written and performed by Evalyn Parry and Laakkuluk Williamson Bathory, for which Brubacher was awarded Best Director by the Toronto Theatre Critics in 2018. Brubacher lives in Toronto.

Christine Brubaker is a director, actor and educator. She splits her time between Calgary, where she is on faculty at University of Calgary's School of Creative and Performing Arts (SCPA), and Toronto, where she works in a variety of theatre contexts, including directing, dramaturging new work and performing. Christine is the creator and co-writer of Henry G20, a large-scale outdoor performance. She is the winner of two Dora Mavor Awards for Performance, the 2014 Gina Wilkinson Prize for Direction, and the 2016 Ken MacDougall Prize for Emerging Director.

Other titles by Erin Brubacher

In the small hours

Other titles by Christine Brubaker

The Trials of John Demjanjuk