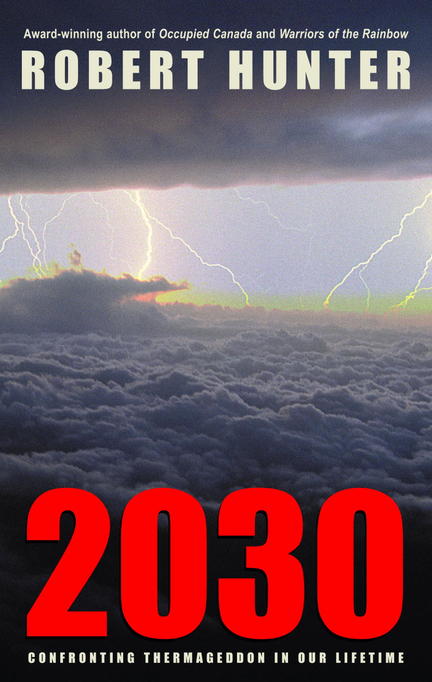 In 2030, Bob Hunter has drawn on the experience of a lifetime to argue that our time is running out on planet Earth. He, and many respected scientists, believe that all environmental lines will be crossed around the year 2030. By that time, climate change will be so extreme as to be irreversible. The burning off of the planet’s ozone layer and the melting of the polar ice cap – with its attendant disruption of ocean currents and flooding of low-lying areas around the world – will be impossible to stop. In this book, he produces the scientific evidence for global warming – and the role we all play in it. Then he goes on to spell out the stunning consequences in his usual vigorous, no-holds-barred way.

What makes this book hopeful, however, is Hunter’s activist-at-the-barricades conviction that, if we all act now, we can still change this. To do so, he argues, we have to make environmental protection the chief concern of every government – local, national, international – turning all our armies and security forces into what Hunter calls “protectors of the lifeboat.” This won’t be easy, for powerful lobby groups, fighting for the oil and gas industries, have immense influence and the ears of our decision-makers. But, Hunter argues, if we do nothing, future generations will have reason to curse us – if there are future generations.

At the same time, each of us can make a personal commitment to, as Hunter says, “step back from the edge.” He freely admits his own lifetime as an “energy mammoth,” but Bob Hunter has pledged – as he argues all of us should – to change his own climate-damaging habits and shows us how this can be done.

Robert Hunter, named one of the ten eco-heroes of the 20th century by Time magazine, is a writer, broadcaster, and speaker on the issues of the environment and climate change. He won a Governor General's Award for his 1991 book Occupied Canada. Robert Hunter passed away in 2005 at the age of 63 years.

Other titles by Robert Hunter

Warriors of the Rainbow

The Greenpeace to Amchitka