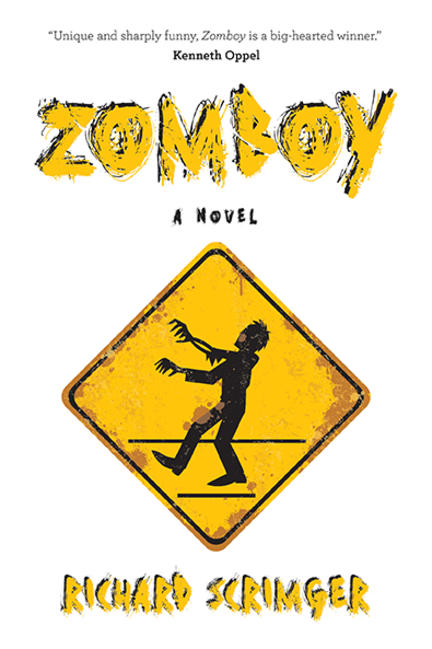 “Yes, Imre is undead,” the principal said. “And we all know the Z word. We hear it all the time. But it’s an unkind word. A bad word. I do not want you to use it. You are the oldest ones here at Westwood. I am counting on you to set an example for the rest of the school.”

He stood behind Imre, his hands on the kid’s shoulders.

“Words can hurt,” he said. “So let’s keep our language friendly, okay? Imre is not like anything you see in movies and video games. He wants what you want—to make friends, to do well, to have fun. He’s like any of you here. Except that his heart isn’t beating.”

Evil-O was nodding intently at all this. “Yes,” she whispered.

I was trying to control my breathing. I had my hand on my wrist, taking my pulse. My heart was beating 280 times a minute. That was 280 times more than Imre’s heart.

From the imagination of one of Canada’s funniest writers for young readers comes the story of a creepy young zombie named Imre Lazar, who, in spite of a few special challenges, is integrated into a regular classroom at Dresden Public School in Ontario. No one is less sure about the school board’s decision than narrator Bob, but his fearless best friend, Evil-O, is Imre’s greatest defender. Clashes and heroics ensue as the community’s tolerance for difference—and Bob’s tolerance for an undead rival—are pushed to the limit in this hilarious, exciting and surprisingly touching novel.

Richard Scrimger is the award-winning author of seven novels for children, three picture books, and three books for adults. Columns detailing Richard’ s adventures in parenthood have been published in "The Globe and Mail, Chatelaine," and "Today’ s Parent." His first children’ s novel, "The Nose from Jupiter," won the 10th Annual Mr. Christie’ s Book Award. His first adult novel, "Crosstown," was short-listed for the City of Toronto Book Award. He and his family live in Cobourg, Ontario.

“A thoroughly original, quirky, and highly entertaining story, this book is classic Scrimger.”

“Scrimger’s lighthearted take on zombie fiction is a fast and frenzied ride through the world of political correctness, with an unobtrusive lesson on empathy and acceptance thrown into the bargain.”

Other titles by Richard Scrimger