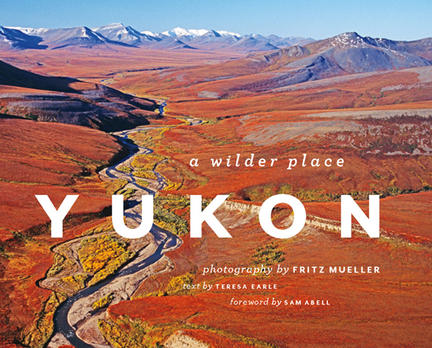 A celebration of the Yukon, one of the world's last wild hot spots.

In this remarkable collection of photographs, Fritz Mueller captures fleeting, compelling moments in a timeless Yukon landscape, one of the world's wildest and most overlooked wilderness areas. The view through Mueller's lens is influenced by his scientific roots and inspired by his visual artist's aesthetic. Although the beauty of this raw landscape is a central theme, his images also tell the story of a magnificent, complex natural system. Mueller takes us on the annual migration of the Porcupine caribou herd, and he captures intimate portraits of icy grizzly bears gorging on salmon at the Arctic Circle. His appreciation for nature's minutiae—voles, berries, frogs—is a refreshing perspective on a landscape writ large.

This photographic work is complemented by an evocative text by Teresa Earle. We learn about the Yukon's vulnerability, as shown in photographs of fragile tundra ecosystems, a rare orchid photographed in a top-secret location, and an icefield bathed in the pink glow of desert dust carried from halfway around the globe. The book is a deeply personal project for this husband and wife team, who spent much of the past two decades exploring landscapes that have defined both their relationship and their passion for wild places.

The authors offer an exquisite portrayal of a wild place on the cusp of change. As wilderness vanishes and intact ecosystems deteriorate, the Yukon remains one of the last wild hot spots, a conservation treasure of international significance.

Teresa Earle grew up exploring the islands and waterways of BC's Georgia Strait near her hometown of Vancouver. She completed a BA at University of British Columbia, worked for the family publishing business, and completed the Writing and Publishing Program at Simon Fraser University. A spontaneous year of dogmushing turned into a decade of adventure in Minnesota, Northwest Territories, Yukon and points overseas. Today Earle is a writer, consultant, entrepreneur and manager of a growing photography business. She's written for Canadian Geographic, explore and Up Here and is a former science and nature newspaper columnist.

Sam Abell has worked with the National Geographic Society since 1970, photographing numerous articles on various cultural and wilderness subjects. He has also lectured on photography and exhibited his images internationally. His work has also been featured in many books, including Stay This Moment: The Photographs of Sam Abell, Contemplative Gardens, Australia: Journey Through a Timeless Land, Lewis & Clark: Voyage of Discovery, Sam Abell: The Photographic Life, Four Stories, and The Life of a Photograph. Abell lives in Albemarle County, Virginia, with his wife, Denise.

Fritz Mueller grew up on a rural homestead in British Columbia's Coast Mountains. Biology was a natural career path for a kid raised in wild country filled with mountain goats and grizzlies. He completed two degrees at University of British Columbia, doing his master's fieldwork near Kluane National Park in the Yukon. For a decade Mueller worked in northern Canada as a zoologist and environmental assessment scientist. In 2003 he quit his government job to take photographs full-time. He does a mix of editorial assignment, stock and commercial photography, but his main focus continues to be telling compelling stories about science, conservation and the interface between people and nature. An award-winning photographer, he's published in National Wildlife, Nature's Best, Ranger Rick, Natural History, Canadian Geographic, Up Here, Defenders of Wildlife, explore, The New Yorker, the Globe & Mail, The Guardian and more.

If landscape is a gymnasium for the sensibilities, as the novelist John Fowles once wrote, then the Yukon is an Olympic gymnastics pavilion . . . We think of these wonders mostly in winter, thanks to stories like Jack London's 'To Build a Fire' . . . But as Fritz Mueller and Teresa Earle reveal in Yukon: A Wilder Place, the land—in its way as much a 'creature of temperature' as London's frostbitten hiker—is stunning in other seasons . . . Contemplating these scenes—and such austere winter beauties as the tire-tread web of fissures and nodules on Kaskawulsh Glacier—will be enough exercise for many. And you won't get your boots wet. —The Wall Street Journal

Each of the stunning photographs in this beautiful book evokes the true glory of this country. To behold these images is to be drawn inexorably into the struggle to protect such lands for all generations yet to come. —Wade Davis

A celebration of Yukon —one of the world's last wild places —this remarkable collection of photographs captures fleeting, compelling moments in a timeless landscape. From a bear eating his breakfast, to a rare orchid photographed in a top-secret location, to an icefield bathed in the pink glow of desert dust carried from halfway around the globe, Yukon is an exquisite portrayal of Canadian landscape. —

Greystone Books has produced another equally handsome coffee-table book: Yukon: A Wilder Place, which showcases the colour photographs of Fritz Mueller, with an accompanying text by freelance writer Teresa Earle . . . Mueller is a biologist, and his photographs are informed by his knowledge—and awe—of nature. There are majestic panoramas of mountains and rivers, delicate close-ups of butterflies and flowers, and dramatic scenes of caribou herds in migration, as well as grizzly bears in pursuit of prey. —Montreal Gazette

Mueller's book features views that few Yukoners will have seen themselves, such as spectacular aerial views of Saint Elias icefields. —Yukon News

This husband-and-wife team—he's a biologist and photographer, she's a writer—has produced a gorgeous tribute to the spectacular beauty of a little-known part of Canada . . . Shot with a biologist's sensibility and an artist's eye, it goes deeper than mere landscape shots, breathtaking though those are, right down to shots of tiny plants underfoot and glacier dust. The action shots of wildlife—a leaping fox catching a bird—create intimate portraits. —Julie Carl, Winnipeg Free Press

A luminous, artful effort. If you want to get an idea what makes the Yukon such a magical place, this is the book to buy. —Ed Struzik

A true reflection of unsullied nature. Yukon: A Wilder Place is beautiful representation of Canada 's North, a place I lived and loved for over twenty-five years. —Ted Harrison

This book is beautifully produced, and it provides the reader with an excellent sense of the Yukon Territory's landscape and what it is like to live here . . . I would highly recommend this book for anyone who wishes to understand and vicariously experience the Yukon, as well as for long-term residents and visitors who want to celebrate its beauty. —ARCTIC

Nothing short of a lifetime commitment to the wild beauty of the Yukon could have produced a book as stunning as this. —Karsten Heuer

Other titles by Fritz Mueller