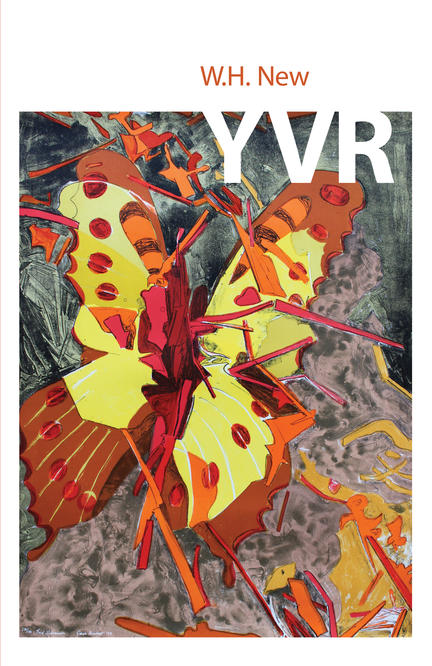 YVR weaves a suite of lyrics into a powerful long poem, a citywide Vancouversong. Combining memoir, civic history, love song, and social critique, it's a highly personal poem, vividly rooted in Vancouver life, and at the same time a charged portrait of social change. In three parts, it begins in disaffection and disruption, tracks its way back into images of childhood (bush, beach, boys at war), and then moves forward again, celebrating “?the sawtooth Coast” and the river, “the shingle house of interruption” and the polyphonic voices of the city now. A poem about instability and edges--about seeing them, addressing them, embracing them--at its heart is a remarkable walk the length of Main Street. To read this book is to live the city: it will fret you, rankle you, jar you and surprise you. It will take you into the city that only a few people know, and it will touch your heart.

WILLIAM NEW is the author and editor of more than fifty books. A native of Vancouver, where he currently lives, he was educated at the University of British Columbia (where he later taught for 37 years) and the University of Leeds. From his first days as a student at UBC, he has been committed to the importance of Canadian writing and to making it accessible to readers around the world. His academic works include A History of Canadian Literature, the massive Encyclopedia of Literature in Canada, and several extensive studies of irony and the short story. Writing more personally, his Borderlands: how we talk about Canada and Grandchild of Empire consider how local perspectives inform our political judgments. A prize-winning teacher and researcher, he was awarded the Royal Society of Canada's Lorne Pierce Medal, and for his services to creative and critical writing he was appointed an Officer of the Order of Canada in 2006.

William New's creative publications include five books for children (including the internationally honoured The Year I Was Grounded) and eleven previous collections of poetry (including Underwood Log, shortlisted for the Governor General's Award; YVR, winner of the City of Vancouver Award; and New & Selected Poems). His latest collection, Neighbours, questions whether any of us ever lives alone.

These poems ask what it means to live near, whether in close proximity or in ragtag memory--and to consider what happens when closeness dissolves and a neighbourhood dies.

Other titles by W.H. New

From a Speaking Place

Writings from the First Fifty Years of Canadian Literature

Along A Snake Fence Riding

A History of Canadian Literature

About Irony, Mainly in the Commonwealth