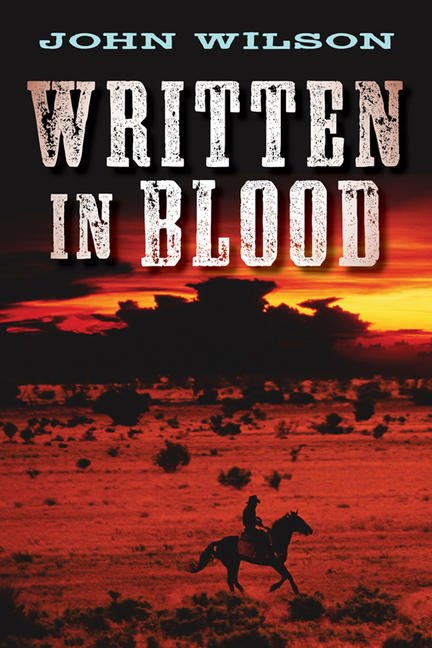 Set in the harsh desert world of the Arizona Territory and northern Mexico during the 1870s, Written in Blood, the first installment of the Desert Legends Trilogy, follows young Jim Doolen as he attempts to find some trace of the father who abandoned his family ten years earlier. As he travels through a scorched landscape very different from the lush West Coast forests of his home, Jim crosses paths with an assortment of intriguing characters, including an Apache warrior, a cave-dwelling mystic, an old Mexican revolutionary and a mysterious cowboy. And with each encounter he learns something more of the strange world he has entered and adds one more link in a chain that leads back to his father-and back to a dark, violent past. As his story approaches its thrilling conclusion in a ruined Mexican hacienda, Jim comes to realize that his father's life was much more complex than he had imagined, and that, in discovering his past, he has opened the way to his future.

I stare over my fire to the west, across the desert plain I crossed today, at the barely discernable black outline of the mountains where I camped last night. The tiny flickering campfire out on the plain is the only light. Every night for the past five days I have seen this fire as darkness falls. There is probably a man sitting by it looking up at the light of my fire. Who is he?

"Has all the markers of a classic Western...Wilson's writing is vivid."

"Wilson is a talented writer, hooking readers within the first few pages of his novel and carrying them along almost effortlessly through the barren lands of Mexico and the Arizona Territory...This first installation is a perfect beginning to what is sure to be an enthralling trilogy that will invite young people into an older world with incredibly relevant contemporary themes."

"Those readers of westerns and historical adventure who like a mix of action and information (actually quite a large set of readers) will be very taken with this book."

"The story is very well written and will appeal to young readers, especially boys. It is full of tension and adventure...Recommended."

"Told in a terse, present-tense narrative, James' adventures will thrill all fans of traditional pulp-style oaters."

"Chapters are short and action filled, Jim is a likable character and reluctant readers will find this to be a fast-paced, easy-to-swallow tale of the Old West."

"The tensions among American, Mexican, and Native factions are well drawn, and Wilson pulls no punches regarding the cruelty of the new world into which Jim finds himself thrown."

A young man’s search for the father who abandoned him and his family takes him through the wilds of Arizona Territory and northern Mexico during the 1870s. He crosses paths with an Apache warrior, a cave-dwelling mystic, an old Mexican revolutionary and a mysterious cowboy. Each encounter links him to the past and leads him into the future.

For the Cowboy in You