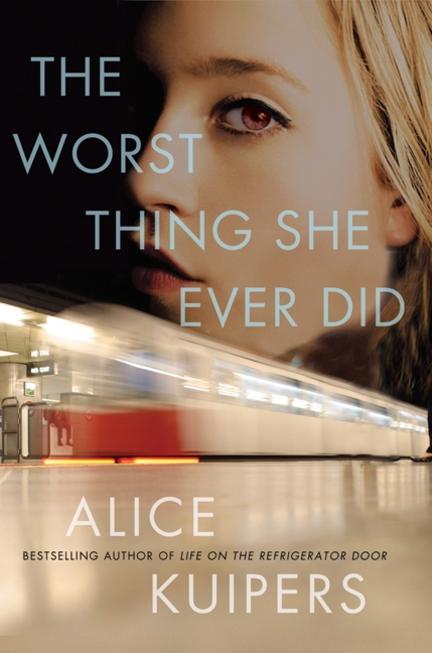 ALICE KUIPERS is the award-winning author of three previous novels, Life On The Refrigerator Door, The Worst Thing She Ever Did and 40 Things I Want To Tell You, and the picture book The Best Ever Bookworm Book by Violet and Victor Small. Her work has been published to critical acclaim in twenty-nine countries. She lives in Saskatoon.

Alice Kuipers’ first novel, the bestseller Life on the Refrigerator Door, was told through a series of notes between a mother and daughter. Her second novel unfolds through dated journal entries made by Sophie, a 15-year-old British schoolgirl. At the urging of her therapist, Sophie reluctantly starts to write. Only gradually do we learn what happened the previous summer — what the therapist wants her to remember and what Sophie is determined to forget — so she can “move on.” Both Sophie and her mother are mourning the loss of her older sister Emily, but differently. Alienated by their grief, they “circle each other like cats.” Sophie suffers nightmares, flashbacks and panic attacks, seeing smoke and shards of glass in everyday situations. She falls for Dan, whose kisses help her forget. Her old friendships are strained, but she finds comfort in her friendship with a new girl at school. The new girl hails from the Canadian Prairies and discusses her difficulties in coming to terms with London. (Kuipers herself, the partner of Canadian author Yann Martel, immigrated from London to Saskatoon and is a contributor to Piece by Piece, reviewed on page 38 of this issue.)

Kuipers plays out the story, building suspense, slowly weaving in clues. Because we see through Sophie’s eyes, we only see as much as she is prepared to admit. And although she sometimes records life around her (such as her friend’s bulimic episodes), she does not always register their impact. Her self-absorption and paralysis can be frustrating, but for herself as much as for the reader. The mother- daughter relationship is a strength of this novel, as is Sophie’s love for her sister. This is a story about grief, post-traumatic stress and survivor guilt, but it is not an ‘issues’ novel. It is a moving exploration of a young woman’s struggle back along a dark tunnel — and the slow process of healing.

Sophie’s sister has passed away, and all Sophie wants to do is forget what happened last summer. But that’s not easy when people keep asking if she’s okay and her mother keeps herself locked away for hours at a time. She retreats into herself — alienating her best friend — but learns to express her thoughts in a journal and through poetry. She must confront the tragedy of her past so she can face the future.

Other titles by Alice Kuipers

Polly Diamond and the Magic Book

The Death Of Us

Life On The Refrigerator Door