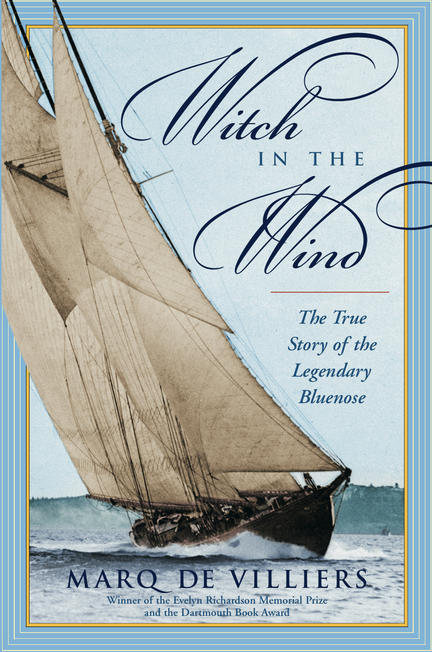 Unlike any previous examination of the Bluenose, de Villiers contextualizes the birth and death of this celebrated ship with rise of industrialization and the decline of the Age of Sail, and the impact of these changes on generations of families whose way of life depended on the sea. Witch in the Wind is an evocative journey into previously untold backstory of the Bluenose, exploring the place that built her, the men who sailed her and the industry that gave rise to her.

De Villiers takes readers deep into the heart of Canadian maritime history, giving new life to the long-standing legend of the magnificent Bluenose.

Born in South Africa, Marq de Villiers is a veteran Canadian journalist and the author of thirteen books on exploration, history, politics, and travel, including Windswept: The Story of Wind and Weather, Water: The Fate of Our Most Precious Resource (winner of the Governor General’s Award for Non-Fiction), Down the Volga in a Time of Troubles, and Into Africa: A Journey Through the Ancient Empires, written with Sheila Hirtle. He has worked as a foreign correspondent in Moscow and through Eastern Europe and spent many years as Editor and then Publisher of Toronto Life magazine. Most recently he was Editorial Director of WHERE Magazines International.

Witch in the Wind demonstrates that the Bluenose was a late flowering in schooner design, a high point of sorts, yet, even when brand spanking new, already an exercise in nostalgia and romance, a last remnant of a lost world of wood and wind and canvas an speed...Witch in the Wind boasts fishing scenes worthy of Melville."

Poignant and often profound, Witch in the Wind shows the tone and texture of a seasoned journalist, peppered with distinct Maritime flavour...

This is not just a book about a pretty legend, a ship-on-a-dime. Instead, it is the story of tough men in a tough trade who put to sea in search of fish, sailing ships that often carried far too much canvas, endangering and often extinguishing the lives of those who crewed them...If you read only one book about the Bluenose, make it this one.

The story of the Bluenose, on waves and land, is... a wonderful story of ingenuity and intrigue and inspiration.

Witch in the Wind sometimes reads like a celebrity tell-all: myths are debunked; the true characters of the famous boat’s owners, skipper, and crew are revealed; and her fierce competition with American ships is exposed in all its ugly glory. De Villiers has done an excellent job of outlining the context behind the building of the Bluenose and her racing success, and has produced a story that is far more interesting than the conventional tale about a magical boat that never lost a race. Boat enthusiasts and landlubbers alike will appreciate de Villiers’ thorough, yet accessible, research.

De Villiers... is a gifted writer with the research skills and authority of a professional historian and the storytelling strengths of an inspired journalist.

Other titles by Marq de Villiers

A Sinner's Guide to Eternal Torment

Principles for a Post-apocalyptic World

The Sahara's Fabled City of Gold

The Story of Wind and Weather

The Strange Origins and Curious History of Sable Island

The Fate of Our Most Precious Resource

A Journey Through The Ancient Empires