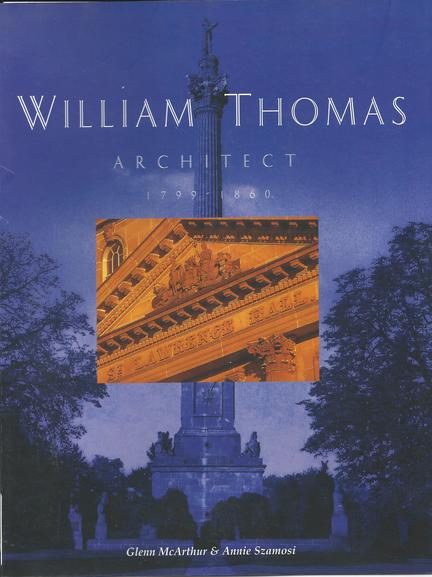 Among architect-historians, William Thomas is recognized as being "one of the founders of the Canadian architectural profession." His prodigious output during a 17-year career in Canada, dating from 1843 to 1860, included over 100 buildings, many of which are still standing today. The significance of Thomas' contribution cannot be overestimated. His buildings became the foci of towns, housing the communities' religious, governmental, educational, commercial and cultural activities. In drawings, prints and photographs of this period depicting Toronto, Quebec City, Hamilton, Halifax, London, Guelph, Chatham and Niagara-on-the-Lake, we can see the direct effects of Thomas' work. His church spires pierce the sky, his public buildings dominate town blocks, often his stores are the most fashionable places to shop and his residential designs are artfully placed within their settings. This publication is of special interest not only for the practising architect or historian but, with its strong visuals and informal style, accessible and entertaining for anyone eager to celebrate our architectural heritage.

Glenn McArthur is a designer, photographer, author, and artist whose work has been exhibited in several galleries. He has worked as a graphic designer for advertising agencies and design studios in both New York City and Toronto. His book on the architect William Thomas received glowing reviews and numerous awards.

Other titles by Glenn McArthur