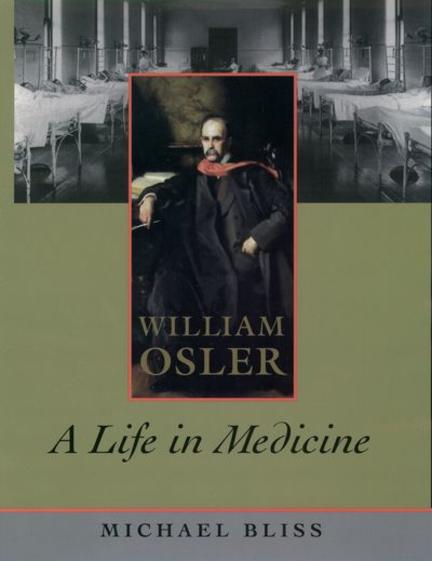 William Osler was born in a parsonage in backwoods Canada on July 12, 1849. In a life lasting seventy years, he practiced, taught, and wrote about medicine at Canada's McGill University, America's Johns Hopkins University, and finally as Regius Professor at Oxford. At the time of his death inEngland in 1919, many considered him to be the greatest doctor in the world. Osler, who was a brilliant, innovative teacher and a scholar of the natural history of disease, revolutionized the art of practicing medicine at the bedside of his patients. He was idolized by two generations of medical students and practitioners for whom he came to personify the ideal doctor. Butmuch more than a physician, Osler was a supremely intelligent humanist. In both his writings and his personal life, and through the prism of the tragedy of the Great War, he embodied the art of living. It was perhaps his legendary compassion that elevated his healing talents to an art form andattracted to his private practice students, colleagues, poets (Walt Whitman for example) politicians, royalty, and nameless ordinary people with extraordinary conditions. William Osler's life lucidly illuminates the times in which he lived. Indeed, this is a book not only about the evolution of modern medicine, the training of doctors, holism in medical thought, and the doctor-patient relationship, but also about humanism, Victorianism, the Great War, and much else.Meticulously researched, drawing on many new sources and offering new interpretations, William Osler: A Life in Medicine brings to life both a fascinating man and the formative age of twentieth-century medicine. It is a classic biography of a classic life, both authoritative and highlyreadable.

Michael Bliss was a Canadian historian and a University Professor Emeritus in the Department of History and the History of Medicine Program at the University of Toronto. He was the author of numerous award-winning books in business and political history as well as the history of medicine, including popular biographies of Sir Frederick Banting, Sir William Osler, and Harvey Cushing. He was an Officer of the Order of Canada, an honorary fellow of the Royal College of Physicians and Surgeons of Canada, and the first historian to be inducted into the Canadian Medical Hall of Fame.

"Bliss gives a well-paced and intellectually fascinating account of Osler's life. He pins down the significant moments in a spectacularly diverse career as a physician and teacher of medicine who did original research on, among other subjects, the components of blood, and wrote in 1892 ThePrinciples and Practice of Medicine, perhaps the most widely read and admired medical textbook of its time."--The New York Review

"This beautifully written detailed account however will no doubt become the classic... True, but this excellent and very readable biography does credit to a great and caring physician and I think Sir William would have been proud of it."--Emery Review

"A well-told, enjoyable, enlightening--and much needed-- biography of a giant of medical practice and education...A first-rate biography of a towering medical figure." --Kirkus Reviews (starred review)

"Most readers will welcome a biography that is both more manageable in scope and more up to date in its assessment not merely of Osler but also of the bustling and creative medical world of the 19th and early 20th centuries in which he practiced. For a generation of readers whose shared valuesare so different from Osler's, William Osler: A Life in Medicine is certain to generate a new appreciation of the man and his remarkably diverse achievements."--Gary B. Ferngren, PhD, New England Journal of Medicine

"Thoroughly documented, this is a biography that is pleasurable to read and deserving of a place in virtually every public, college, and medical library."--Booklist

"An excellent, readable biography written by a true scholar of medical history who knows his man and his material intimately."--Journal of the American Medical Association

"Eminently readable.... This is the sort of writing that has the air of coming easily off the pen, in spite its scholarly documentation and the enormous wealth of research and erudition hidden between its lines.... A fascinating story about a fascinating man."--Sherwin B. Nuland, The NewRepublic

Other titles by Michael Bliss

The Discovery of Insulin

The Descent of Canadian Politics from MacDonald to Chrétien

The Making of Modern Medicine

Turning Points in the Treatment of Disease

A Life in Surgery

The 1935 classic of Canadian socialist thought