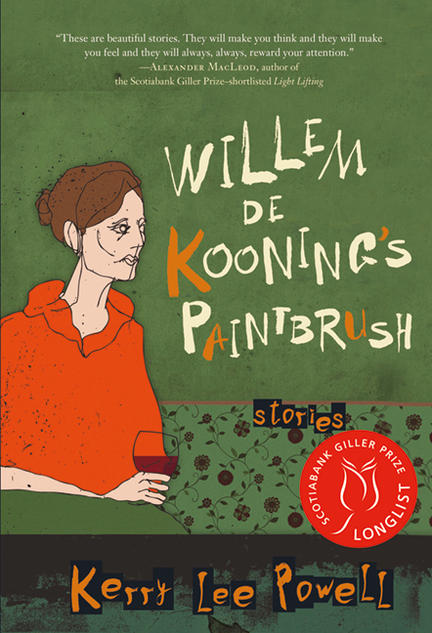 LONGLISTED FOR THE SCOTIABANK GILLER PRIZE

“A literary high-wire act, not for the faint of heart.” —ALISSA YORK

An unflinching and masterful collection of award-winning stories, Willem de Kooning’s Paintbrush is a career-making debut. Ranging from an island holiday gone wrong to a dive bar on the upswing to a yuppie mother in a pricey subdivision seeing her worst fears come true, these deftly written stories are populated by barkeeps, good men down on their luck, rebellious teens, lonely immigrants, dreamers and realists, fools and quiet heroes. In author Kerry Lee Powell’s skillful hands, each character, no matter what their choices, is deeply human in their search for connection. Powell holds us in her grasp, exploring with a black humour themes of belonging, the simmering potential for violence and the meaning of art no matter where it is found, and revealing with each story something essential about the way we see the world.

A selection of these stories have won significant awards including the Boston Review short story contest and The Malahat Review’s Far Horizons Award for Short Fiction.

Born in Montreal, KERRY-LEE POWELL has lived in Australia, Antigua and the United Kingdom, where she studied Medieval and Renaissance literature at Cardiff University and directed a literature promotion agency. Her work has appeared in journals and anthologies throughout the United Kingdom and North America, including The Spectator, the Boston Review and the Virago Writing Women series. In 2013, she won the Boston Review fiction contest, The Malahat Review’s Far Horizons Award for short fiction and the Alfred G Bailey manuscript prize.

“An energetic and disturbing collection of stories. I loved the rush of reading it.”

Christos Tsiolkas, author of The Slap and Barracuda

“Masterful . . . . In several stories, characters mired in difficult situations look to the mystical to help them escape, and Powell’s delicacy in these stories is wonderfully successful.”

“Kerry Lee Powell writes with the voice of a prophet crying from the wilderness. She writes of liars and losers, frauds and impostors who dream of escape into extremity, escape from life’s artificiality. With a poet’s control over imagery, her painted tableaux explode into sudden shimmering violence.”

“Harrowing, whip-smart, both lyrical and tough-as-nails, these stories pack a wallop. With her keen eye and wide-open heart, Powell has managed to capture the strange, malevolent undertow that burbles just beneath the surface of contemporary life. And lucky for us, it makes for a breathtaking read.”

Michael Christie, author of The Beggar's Garden and If I Fall, If I Die

“A transcendent collection . . . . Within Powell’s 15 stories, it is impossible to pick a crown jewel. Each one feels like the favourite until the next.”

Short Stories to Come Back to Again and Again

The 13 Worst Holidays in Canadian Literature

Some very good reasons to stay home with a good book.

Short Story Collections Not To Be Missed This Summer

Canadian writers sure know how to rock the short story—we are the nation that brought the world an Alice Munro after all.