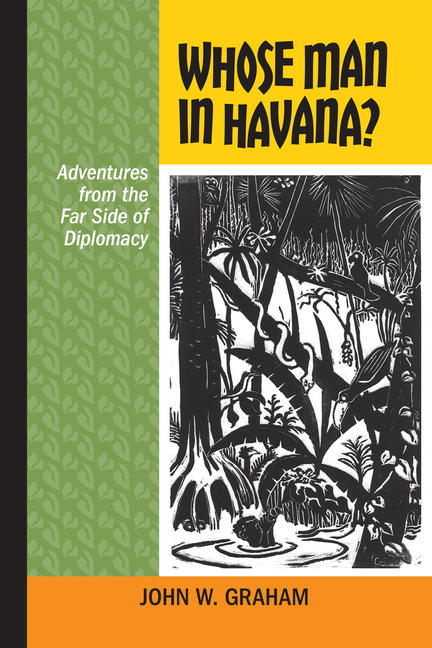 In Whose Man in Havana? the author offers an unconventional, often dark, but more often hilarious view of diplomacy in settings as varied as Haiti, London, the Dominican Republic, the Balkans, Palestine, Paraguay, Guyana, and Kyrgyzstan, including covert monitoring of Soviet military operations in Cuba on behalf of the CIA with the blessing of President Kennedy and Prime Minister Pearson. In a career that spans the Canadian foreign service and international organizations, he was fortunate to be in the right place at interesting, if turbulent, times. Throughout the book he has focussed on the lighter side of people and places, but almost everywhere the dark side intrudes. Graham makes plain that the intersection of the two is frequently black comedy.

"Brilliant...from one of the foreign service's best raconteurs." James Bartleman, author of Roller Coaster and Out of Muskoka, former ambassador and former Lieutenant-Governor of Ontario.

"Splendidly written and marvellously funny." Robert Bothwell, University of Toronto, co-author of Pirouette and the Penguin History of Canada.

"A rollicking, engaging memoir ... a feast of colourful tales that don't quite obscure a serious piece of work on the diplomacy of the period... writing of the highest order." Paul Durand, former ambassador and international mediator.

John W. Graham is a former Canadian ambassador whose postings in the foreign service and subsequently with international organizations took him to exotic, often uncomfortable, and sometimes remote parts of the world. Many assignments were in Latin America and the Caribbean, but ranged widely from Bosnia and Eastern Europe to the West Bank and Central Asia. In various times and places He was High Commissioner (Guyana), Director General for the Caribbean and Central America, Ambassador (Venezuela and the Dominican Republic), first head of the Unit for the Promotion of Democracy in the Organization of American States (OAS), international mediator in a major crisis in the Dominican Republic and a senior elections officer immediately following the Bosnian war, and leader of five election observation missions and participant in many more. He is a member of The Friends of the Inter-American Democratic Charter and former chair of the Canadian Foundation for the Americas (FOCAL).

Robert Bothwell is professor of history and director of the International Relations Program at the University of Toronto.Jean Daudelin is assistant professor at The Norman Paterson School of International Affairs, Carleton University.

Other titles by Robert Bothwell

Your Country, My Country

A Unified History of the United States and Canada

A Traveller's History of Canada

The Politics of Partnership