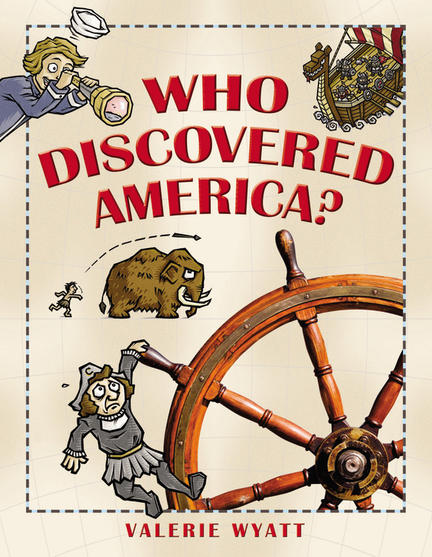 Who discovered America? There's no simple answer. The question points to an ongoing mystery of continent-sized proportions.

Christopher Columbus stumbled upon America in 1492 while looking for a western route to the Indies, but he wasn't the first. The Vikings settled briefly on the coast of Newfoundland hundreds of years before him, and left ruins to prove it. Explorers from Portugal, China, Scotland, Wales, Ireland and elsewhere can also stake claims.

In addition to investigating all serious claims, award-winning author Valerie Wyatt delves into the continents' most ancient mysteries, some stretching back 40,000 years. Who Discovered America? reveals that historical sleuthing takes many years of hard work, puzzle solving and comparing legends and artifacts.

Young readers will find the question of who discovered America much less simple, and much more fascinating, than they ever dreamed.

... Wyatt ranges far more widely than most writers on this subject ... Readers will be delighted ... Fascinating fare ...

An engaging introduction to the topic.

“So who did discover America?” asks award-winning editor and author, Valerie Wyatt. Her latest book sets out to answer this provocative question with theories, myth, stories, clues and facts. She begins by telling us that we will be reading about all of the Americas – North, Central and South – because there is evidence in all three areas about who was the first to arrive on this side of the world. Columbus gets first mention as the discoverer of historical record. But we know now that we must dig further. What of the Chinese ruins that a Canadian architect found in Cape Breton? And what of those murky tales from Venice in 1400 and Wales in 1100 of sailors landing on our shores? Wyatt examines stories of the Norse and Irish travellers, and then changes tack and looks at our Aboriginal people and how their ancestors got here. Several chapters are then devoted to various theories and evidence about our earliest inhabitants who probably arrived from the Pacific side of the world, not the Atlantic.

As the author notes, the mystery will never be solved but it remains a fascinating subject. We have to look a lot further than our European ancestors to get a true picture.Wyatt has successfully distilled a lot of complex information into a very readable book that is informative without being overwhelming to a young reader or researcher. It is nicely organized, with each topic covered in a double-page spread and a nice balance of text and illustration. There are lots of photos, and cheery cartoon drawings but the pages never feel cluttered. This is a great book for projects but will also appeal to a child interested in explorers or archaeology. The author includes a timeline, glossary and extensive index.

Scientists and historians want to know who discovered America. Some possible candidates are Chinese seafarers, Vikings from Greenland, an Irish monk and Aboriginal mammoth hunters. So who really did discover America? Read the evidence, then you be the judge. Contains artwork, photos, timeline, glossary and index.

Other titles by Valerie Wyatt

How to Build Your Own Country

Welcome to the World

How to Build Your Own Country

Kids Book of Canadian Firsts, The

Math Book for Girls, The

and Other Beings Who Count

Earthlings Inside and Out