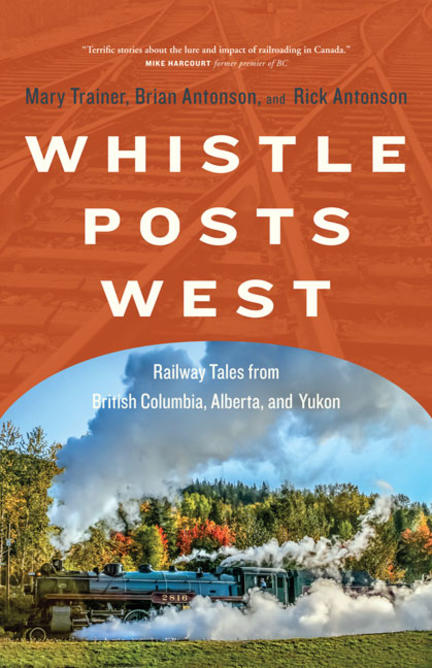 Everybody has a train story. Whether it comes from a distant relative who worked on the railways or from a family train trip that formed a lasting impression of the Canadian landscape, trains inspire a sense of wonder and nostalgia. They are embedded in the history of Canada as a whole and western Canada in particular, and for generations they were how most people travelled and saw the country. Today, trains get the most attention in the context of tragedy, in the aftermath of rare but catastrophic derailments. However, train stories go beyond these modern-day disaster tales or romantic glimpses into the past. Whistle Posts West presents a compelling array of stories that illustrate how and why the railways continue to capture our imaginations. From the heartbreaking to the humorous, from the awe-inspiring to the absurd, this fascinating collection of railway tales from BC, Alberta and Yukon is sure to please.

Mary Trainer, Brian Antonson, and Rick Antonson founded Nunaga Publishing in 1972, and together they published more than twenty-five books, including In Search of a Legend: Slumach’s Gold, which was re-released by Heritage House in 2007. Mary Trainer has been writing about British Columbia for four decades and was a communications coordinator with Metro Vancouver for twenty years. Brian Antonson is associate dean of Broadcast and Media Communications at the British Columbia Institute of Technology. In the 1980s, Rick Antonson became vice president of the Great Canadian Railtour Company Ltd., which led to his role as president and CEO of Tourism Vancouver, a post he held until 2013.

In his early 20s, Brian collaborated with Rick Antonson and Mary Trainer to write and publish In Search of a Legend: Slumach's Gold in 1972. The incentive to create the book actually originated two years earlier as a way to celebrate the centennial of B.C.'s entry into Confederation in 1971. Inspired by the afterglow of Canada's centennial and Expo 67, the trio was part of a new generation that was passionate about being Canadian—and about all things Canadian. The trio created a publishing house, Nunaga (the Inuit word for "my land, my country") Publishing, and between 1972 and 1979 they published more than 25 books under this imprint and Antonson Publishing.

Born in Vancouver in 1949, Rick Antonson attended Simon Fraser University and started Antonson Publishing and Nunaga Publishing in the early 1970s. In the mid-1980s Rick worked as vice-president and general manager of Douglas & McIntyre, also serving as president of the Association of Book Publishers of British Columbia. He left publishing to become vice president of the Great Canadian Railtour Company Ltd., operating a train service between Vancouver and the Canadian Rockies. This led to his role as president and CEO of Tourism Vancouver. Rick has also served as chairman of the Oceans Blue Foundation, a group that works to encourage a more environmentally responsible approach to tourism in the Pacific Northwest. Rick was on the Board of Directors for Vancouver/Whistler 2010 Olympic Winter Games Bid Corporation and has served as co-chairman for the BC Special Olympics.

"Whistle Posts West is a must-read for serious train buffs and armchair rail travellers alike. It has tragedy, intrigue, humour, poetry, and railroad jargon. It is especially rich with Western Canadian history . . . so sit back and enjoy the ride!" —Garry Marchant, author of The Peace Correspondent

"Terrific stories about the lure and impact or railroading in Canada [told with] punchy, robust writing." —Mike Harcourt, former premier of British Columbia and former railroader

"Capturing the environment of railroading and putting it on paper embeds the reader in the dedication of the writers. This book will become a classic." —Herb Dixon, president, Alberta Railway Museum

Other titles by Mary Trainer

Other titles by Brian Antonson

Other titles by Rick Antonson

To Timbuktu for a Haircut

A Journey through West Africa

BC Books From Thompson-Okanagan