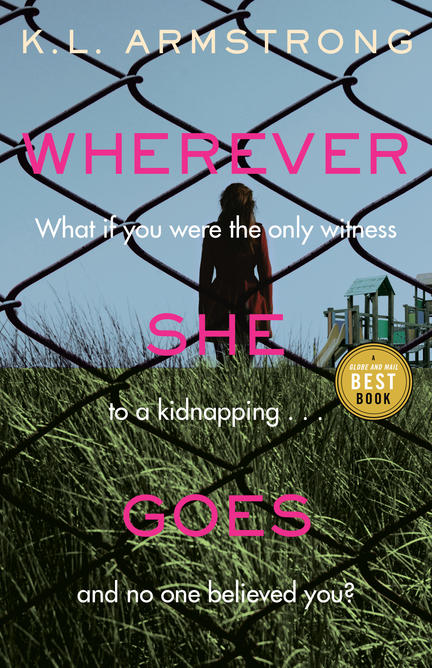 NATIONAL BESTSELLER
"Few crimes are reported as quickly as a snatched kid."

Instead, people question her sanity. Aubrey hears the whispers. She's a former stay-at-home mom who doesn't have primary custody of her daughter, so there must be something wrong with her, right? Others may not understand her decision to walk away from her safe life at home, but years of hiding her past--even from the people she loves--were taking their toll, and Aubrey knows she can't be the mother or wife she envisions until she learns to leave her secrets behind.

When the police refuse to believe her, she realizes that rescuing the boy is up to her alone. But after all the secrets, how far is she willing to go? Even to protect a child.

K.L. Armstrong is the pseudonym of a popular author. She lives in Ontario.

National Bestseller
A Globe and Mail Book That Shaped 2019

"Smart, tough and relentlessly fast. Hard to put down." —Shari Lapena, #1 Bestselling Author of The Couple Next Door

"[Wherever She Goes is] one of the best books of the summer and a sure nominee for an Arthur Ellis Award for excellence in Canadian crime writing. Google tells me that the real writer is Kelley Armstrong but all the publisher will say is that it's by a popular author living in Ontario. Whoever, this is the runaway book of the summer." —The Globe and Mail

"[An] expertly crafted domestic thriller. . . . Clever twists, realistic complications and a propulsive, present-tense narration catapult the story to a gratifying finish. This is a gripping tale of secrets, lies and maternal anxieties." —Publishers Weekly, starred review

Other titles by K.L. Armstrong

The Life She Had

Every Step She Takes