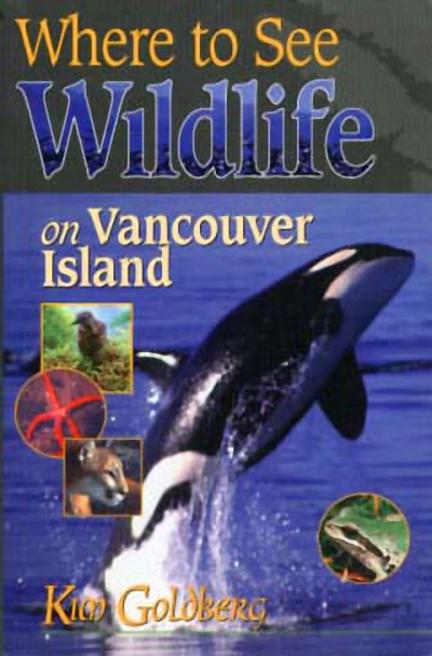 Vancouver Island is one of the richest wildlife viewing areas in Canada, with diverse and extraordinary creatures ranging from Anise Swallowtails to Opalescent Squid to Gray Whales. With more than 200 colour photographs, plus maps, index, a calendar of events, species checklists, seasonal bar graphs, and safety tips, this book is perfect for both the serious naturalist and the weekend wildlife watcher.
Vancouver Island, one of British Columbia's holiday hotspots, is 450 kilometres long with an astounding range of wildlife habitats: lush, mossy rainforests, a mountain range with peaks that reach over 2,000 metres, fertile lowlands, productive estuaries and pockets of near-desert habitat. This diversity, combined with the Island's placement on the Pacific flyway for migratory birds, gives the area a remarkable range of animals and plants.

Where to See Wildlife on Vancouver Island, written by award-winning journalist and author Kim Goldberg and the first wildlife guide book devoted to the island, introduces 50 of the best wildlife viewing sites and is illustrated with maps and over 200 colour photos of island animals and plants.

The 50 sites stretch from Victoria to Port McNeill on the east coast, and from East Sooke to Tofino on the west coast, where possibilities for viewing wildlife - even some endangered species - abound. 387 species of birds have been recorded here, along with 66 butterflies and 50 mammals including the Northern Sea Lion, Black Bear and Roosevelt Elk. Vancouver Island also supports 25 percent of the world's Trumpeter Swan population each winter, 100 percent of the world's endangered Vancouver Island Marmots, and receives an annual "sail past" of 21,000 Gray Whales each spring, virtually the entire global population. Nearly all the sites included in the book are readily accessible by car or ferry.

In addition to the site descriptions, maps and illustrations, Goldberg's user-friendly and information-packed book contains interesting facts about wildlife and their habitat, a wildlife viewing calendar, tips for ethical adventuring, bear and cougar precautions and checklists for island mammals, birds, herptiles and butterflies.

Kim Goldberg is an award-winning journalist and author specializing in nature and the environment. Her articles have appeared in BBC Wildlife Magazine, This Magazine, Earthkeeper, and the Vancouver Sun. She holds a degree in biology from the University of Oregon and has spent twenty years exploring Vancouver Island as a hiker, birdwatcher, and amateur naturalist. She is the author of several books including Submarine Dead Ahead! and Waging Peace in America's Nuclear Colony.

Other titles by Kim Goldberg