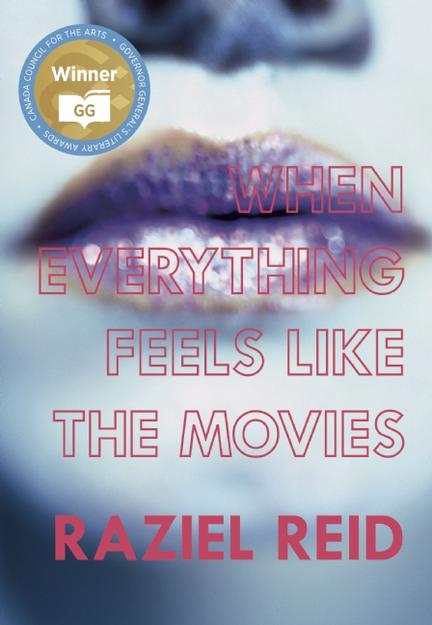 An edgy and extravagant YA novel about a glamorous boy named Jude.

School is just like a film set: there's The Crew, who make things happen, The Extras who fill the empty desks, and The Movie Stars, whom everyone wants tagged in their Facebook photos. But Jude doesn't fit in. He's not part of The Crew because he isn't about to do anything unless it's court-appointed; he's not an Extra because nothing about him is anonymous; and he's not a Movie Star because even though everyone knows his name like an A-lister, he isn't invited to the cool parties. As the director calls action, Jude is the flamer that lights the set on fire.

Before everything turns to ashes from the resulting inferno, Jude drags his best friend Angela off the casting couch and into enough melodrama to incite the paparazzi, all while trying to fend off the haters and win the heart of his favourite co-star Luke Morris. It's a total train wreck!

Raziel Reid is a graduate of the New York Film Academy. A former go-go boy turned society columnist and pop culture blogger (for DailyXtra.com), he currently lives in Vancouver. His first book, When Everything Feels like the Movies, won the 2014 Governor General's Literary Award for children's literature (text). A song written and performed by Raziel in accompaniment to the book entitled "Like a Movie Star" is available for download on iTunes, and a video is available to view on YouTube. Follow him @razielreid.

A tightly constructed life-as-a-stage allegory, complete with filmic idolatry and requisite amounts of love, lust, and all associated melodrama. -Backlisted

Raziel Reid's debut novel beautifully and brutally spotlights how boundless the queer imagination is, especially as a survival instinct. The protagonist Jude Rothesay is a glamorous and brassy teenager, most inspiring for his persistent devotion and commitment to himself. I wish I had a role model or friend like Jude and a beacon like When Everything Feels like the Movies when I was in high school. -Vivek Shraya, author of God Loves Hair and She of the Mountains

When Everything Feels like the Movies is convincing from the very start, Jude's point of view perfectly executed and consistent. In order to create a sense of agency over his life, Jude imagines high school as a movie set, the complex social structures comprising players with their parts. And his part is unabashedly himself, for there is no one else he can be (and the alternative would be being no one at all), moreover his self-definition is limited by others' expectations of his behaviour, and he plays right into that role. Jude and his friend Angela are crude, stupid, vindictive, reckless, and cruel in the manner that all people are when they are learning about words and responsibility and the power to hurt and shock (and be noticed). In this way, they're not so different from their more conventional classmates. Every single one of them is scared, insecure, terrified of being found-out, and trying to be bullet-proof. -Pickle Me This

This story is a whirlwind of gender-bending drama with plenty of pop culture references. -School Library Journal

His extravagant fantasies and irrepressible nature make Jude one of the most memorable teen characters in recent CanLit. -CBC Books

Reid's novel is truly a no holds barred examination of a young man attempting to explode into adulthood, with all the raw sexuality and gritty realism that such a journey entails. -CM Magazine

When Everything Feels like the Movies refuses to conform to the gender and sexuality norms of the YA genre (a genre inundated with straight, cisgender, upper-middle-class teens whose sexual fantasies end at second base), and it's honest and beautifully written. I wish I had read any stories like this one when I was in Jude's position: an angry, foul-mouthed queer teen growing up in a small town. -Geist

A powerful first book, an important book for young queer youth, and written like a burst of glitter gushing through an open wound. -Lemon Hound

I'm struggling to find the right words to put alongside this book for a review, because I'm not entirely sure I can fathom the words required to really do this book justice. It's incomparable, and it's completely unlike anything you've ever read before. It will shock, but in the best way possible.
-The Guardian

Even within the realm of YA books about gay, cross-dressing teenagers, When Everything Feels Like the Movies stands out. It doesn't mince words, and often those words are the kind not generally found in children's literature. -Montreal Gazette

Other titles by Raziel Reid