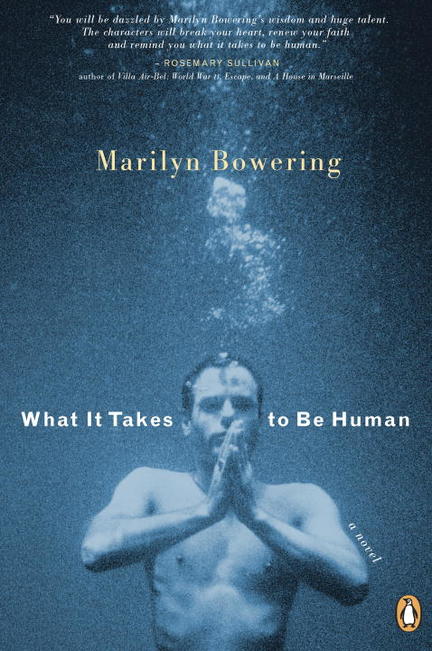 What It Takes to Be Human, the haunting new novel by Orange Prize–shortlisted author Marilyn Bowering, considers the life of Sandy Grey, an idealistic young air cadet who wants nothing more than to enlist in the Second World War. Sandy’s father, a fundamentalist preacher, refuses to grant his son’s request, fearing that the world is living its very last days. When Sandy’s attempts to oppose his father turn violent, the novel takes a dramatic shift in setting into the fragmented world of an asylum for the criminally insane. Bowering pushes her characters to the very fringe of civilization, love and sanity during the darkening days of a distant conflict to expose the acute parallels between their lives and the lives of those being torn apart by war.

"One of Canada’s most eloquent storytellers has given us a compelling and exquisitely crafted tale about hope, love and creativity."—Susan Swan

"Marilyn Bowering has written an astonishing novel, full of hope and courage—a brilliant antidote to cynicism and despair."—Isabel Huggan

"Marilyn Bowering is one of our whistle-blowers. Her new book tells us What It Means to Be Human—something we seem on the brink of forgetting. Classic in form, this white-knuckle book leads us through a contemporary underworld before bringing us up, once again, to the light. Required reading!"—P.K. Page

Marilyn Bowering has had two previous volumes of poetry nominated for the Governor General's Award: Autobiography and The Sunday Before Winter. The former also won the Pat Lowther Award. Her novel Visible Worlds received the Ethel Wilson Fiction Prize and was shortlisted for the prestigious Orange Prize. Bowering is also the author of Human Bodies: New and Selected Poems and the novel To All Appearances A Lady. She lives in Sooke, British Columbia.

Other titles by Marilyn Bowering

What Is Long Past Occurs in Full Light

To All Appearances a Lady

The Alchemy of Happiness