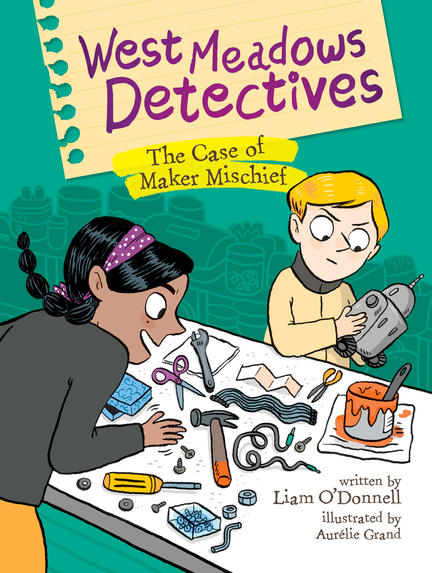 Myron, the third-grade detective who loves logic, facts, and solving mysteries, gets the chance to crack another case when he finds out his classmate Jordan’s robot has been stolen. Jordan and tech-savvy Danielle, known as “Glitch,” had been working on it for weeks for the upcoming Maker Faire Robot Maze Challenge.

Together with his detective partner, the hyper-energetic Hajrah, Myron pins down two suspects: Sarah “Smasher” McGintley, the school bully, and Lionel Amar, another robot builder who was caught with Jordan and Glitch’s plans. But after investigating the case further, they find out the thief is someone entirely unexpected.

Myron’s unique perspective from the autism spectrum and his eye for detail make him a top-notch sleuth. Similarly, the other neurodiverse kids in his resource room demonstrate creative problem solving and unique talents that come in handy for the case.

Black-and-white spot illustrations accompany the text in this fun and accessible page-turner for independent readers. With a connection to STEAM and the maker movement, this book is an exciting next installment in the West Meadows Detectives series.

AURÉLIE GRAND graduated from Capilano University in British Columbia in 2009, and since then has been living an illustrator's life like a Jacques Demy movie: musical, colorful and dramatic. She likes to draw goofy animals, a wide range of facial and body expressions (some that don't even exist), and illustrate wordplays. She lives in Montreal, Quebec.

"Readers will enjoy following Myron's developing, appealing voice as much as they do following clues."

"Suspenseful...intriguing...a superb tool to teach students to make predictions as they read. ...This gripping chapter book with a surprise ending is one that children will not want to put down. Recommended."

"The cast of characters is diverse and realistic, depicted with nuance and individuality."

Myron Matthews, a young boy with autism, and his good friend Hajrah, become junior detectives, determined to solve the case of the missing Robson the Robot. Through their adventures, readers will learn about the importance of cooperation, collaboration and problem-solving. Reading about protagonist Myron will also help young readers learn understanding for and acceptance of those with special needs.

Other titles by Liam O'Donnell

Tank & Fizz: The Case of the Tentacle Terror

West Meadows Detectives: The Case of the Berry Burglars

Tank & Fizz: The Case of the Missing Mage

West Meadows Detectives: The Case of the Snack Snatcher

Tank & Fizz: The Case of the Battling Bots

Tank & Fizz: The Case of the Slime Stampede

Other titles by Aurélie Grand

West Meadows Detectives: The Case of the Berry Burglars

West Meadows Detectives: The Case of the Snack Snatcher