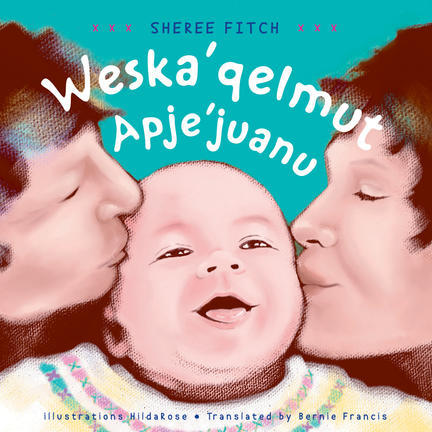 Repetition, rhythm and active verbs create a lively story that can be read again and again. Heart-warming illustrations by HildaRose combine realism and a whimsical, artistic style, while paying close attention to the needs of newborn readers, including such elements as: stimulating visuals, patterns, baby faces, cultural diversity and interaction with others. And babies will drool over the small, easy to hold format! Translated from English by Bernie Francis.

Bernie Francis, DLitt, grew up on the Maupeltu (Membertou) First Nation community in Cape Breton, NS. From 1970-1974, he worked as the Director of the Court Worker Program for the federal court system, a program that ensures fair and proper treatment for Mi’kmaw people including access to a translator. After leaving the court system, Bernie began his training in linguistics with linguist Doug Smith from the University of Toronto. Bernie completed that training in 1980, having developed a new orthography of the Mi’kmaw language with Professor Smith. The Smith/Francis orthography is now officially recognized by the Mi’kmaw chiefs in Nova Scotia, as well as by the Canada-Nova Scotia-Mi’kmaq Tripartite Forum. Dr. Francis received an honorary doctorate from Dalhousie University in October, 1999. He continues to work on many projects including the Pjila’si Mi’kma’ki: Mi’kmaw Place Names Digital Atlas and Website Project.

Hilda Rose lives and works in Prospect Bay, Nova Scotia. Trained as a graphic designer, she worked in musems for many years but not works in her home studio on various graphic design and illustration projects, as well as studying towards an MEd. She has illustrated several children's books including baby board books Baby's Lullaby and Kisses, Kisses, Baby-O!.

Other titles by Bernie Francis

The Mi'kmaw Grammar of Father Pacifique

The Language of This Land, Mi'kma'ki

Other titles by Hilda Rose

Johnny and the Gipsy Moth

Freddy's Day at the Races