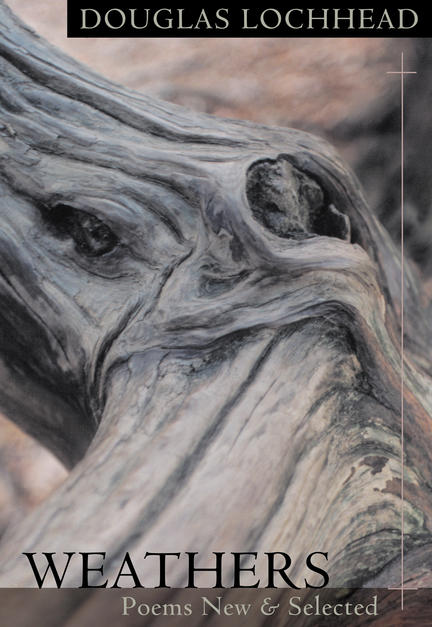 Douglas Lochhead is one of Canada's finest poets. In celebration of his eightieth birthday, Goose Lane Editions is releasing Weathers: Poems New and Selected, a collection of the best of Lochhead's work from the last fifteen years.

Douglas Lochhead's poetic imagination receives its greatest stimulus from what his senses tell him about nature and other people, and his poetry overflows with energy. Sharp observation of detail anchors his passionate sense of place; subtle irony and masterful form barely contain his uncompromising honesty and strong emotions; and his command of the poet's craft guides his attacks on the boundaries of meaning. The contrast he achieves between tightly controlled form and constantly moving, dynamic imagery yields the clean, precise poetry that his readers have valued so highly over his more than 50-year career.

Lochhead began his career in the 1940s, publishing his poems in literary journals. His first book, The Heart is on Fire was published in 1959, and in the next two decades he published eight more books of poetry. In 1980, his landmark collection High Marsh Road was nominated for a Governor General's Award. In 1986, Goose Lane Editions published Tiger in the Skull: New and Selected Poems, 1959-1986, Since that time, Douglas Lochhead has published four major collections: Upper Cape Poems, a testament to his fascination with the Tantramar Marsh; Homage to Henry Alline, a tribute to an 18th-century evangelist; Breakfast at Mel's, superbly crafted poems about the magic of place, and the rewards of observation; and Cape Enragé, poems written on the wild shore of the Bay of Fundy.

In the award-winning art book Dykelands, his austere nature poems accompany Thaddeus Holownia's large-format photographs. He has also published All Things Do Continue, Yes, Yes, Yes!, and Black Festival, a beautiful memorial to his wife.

For Weathers, Douglas Lochhead has collaborated with editor David Creelman, who teaches Atlantic literature at the University of New Brunswick, Saint John. Together, they have gathered the strongest works from Lochhead's books, new poems published in literary journals, and previously unpublished poems to create the quintessential collection of Lochhead's writing.

In the spring of 2001, Douglas Lochhead received the Alden Nowlan Award for Excellence in English-language Literary Arts from the Lieutenant Governor of New Brunswick. He is a Fellow of the Royal Society of Canada, a Member of the Order of Canada, the recipient of honorary doctorates from several universities, Professor Emeritus at Mount Allison University, Senior Fellow and Founding Librarian at Massey College, University of Toronto, and a life member of the League of Canadian Poets. After beginning his career as an advertising copywriter, he became a librarian, a professor of English, a specialist in typography and fine hand printing, and a bibliographer, scholar, and editor — indeed, he has characterized himself as “an unrepentant generalist.” At Mount Allison University, he was a founder and the director of the Centre for Canadian Studies, and he held the Edgar and Dorothy Davidson Chair in Canadian Studies.

"The small becomes the great, expanding to fill our vision ... his details, absorbed, expand to fill a world."

Other titles by Douglas Lochhead

poems on a raised beach

and Other Poems of Love and Places

Lines for a Diary

Homage to Henry Alline and Other Poems

Tiger in The Skull

Other titles by David Creelman

Setting in the East