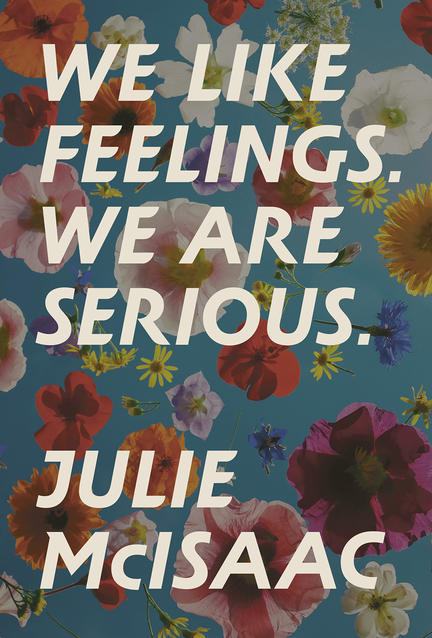 In a powerful combination of prose poems, graphica, lyric poems and lyric essays, Julie McIsaac's new book is at once fiercely political, intimate and hilarious. We Like Feelings. We Are Serious. is an exploded view of contemporary feminism, sex, loss, beauty myths, self-doubt, psychology, menstruation, resistance, family and love. Intellectually dazzling, emotionally lavish and allergic to bullshit, this is a book that is timely, refreshing and wholly original.

Of French, Scots/Irish and Norwegian ancestry, Julie grew up on the southern shores of Georgian Bay, on the traditional territories of the Odawa, Ouendat, Anishinabek, and Haudenosaunee Confederacy. A stage director, playwright/librettist and multi-instrumentalist, she earned her Master's in Theatre from the University of York (UK) and is also a graduate of Carleton University (Music) and the Canadian College of Performing Arts (Theatre Performance; Playwriting). A four-time Jessie award nominee, she has appeared on stages throughout Western Canada, including productions at the Arts Club, Bard on the Beach, the Belfry, the Citadel, Carousel Theatre, Pacific Theatre, Fugue Theatre, Théâtre la Seizième, Twenty Something Theatre, and the Chemainus Theatre Festival. She is an Associate Artist with Firepot Performance and a founding member of the Honest Fishmongers (Critics' Choice Innovation award nomination, 2012). She is a frequent collaborator with Urban Ink: Associate Director of Children of God, co-bookwriter & co-lyricist of Les Filles du Roi and Music Director of Sedna at Caravan Farm Theatre. Other credits include directing Le nozze di Figaro (Opera Studio), .Little Women, Pride & Prejudice and Harvey at the Chemainus Theatre Festival, the world premiere of My Rabbi (Sum Theatre), The Exquisite Hour (Playhouse Fringe award), and the multiple award-winning slam poetry musical Poly Queer Love Ballad. She is also the playwright, composer-arranger, music director and co-sound designer of The Out Vigil (Firepot Performance), 2016 Jessie award with Jason Clift.

"What it's about: We Like Feelings. We Are Serious. combines poetry with essays and illustrations to create a powerful collection that explores womenhood in 2018 and all that comes with it: feminism, bodily functions, sex, love, family and more." - CBC Books

Other titles by Julie McIsaac