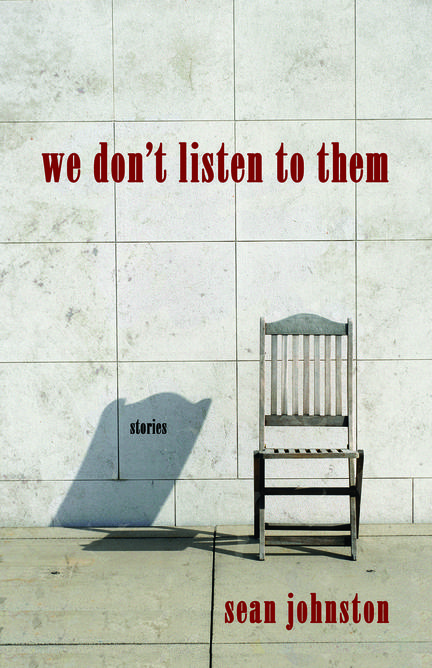 Sean Johnston was born in Saskatoon and grew up in Asquith, Saskatchewan. He has worked across the prairies as a labourer and surveyor, received a Bachelor of Journalism at Carleton University in Ottawa, and recently finished a MA in Creative Writing at the University of New Brunswick. His poetry and fiction has appeared in many literary journals and anthologies, including Speak! (Broken Jaw Press). The manuscript for A Day Does Not Go By won the 2002 David Adams Richards Award for fiction. Johnston currently lives in Vancouver.

Excerpt: We Don't Listen to Them (by (author) Sean Johnston)

In an inviting and challenging series of fictions, Sean Johnston’s We Don’t Listen To Them will leave readers puzzling while they smile at the acrobatics of his words and techniques. Some of Johnston’s stories border on “flash fiction” where incidents rather than an actual narrative drive the story. In the opening piece “How Blue” a boy is caught in the vortex of his father who drinks, his mother who condones, and a church representative who reforms. There is no plot, just Ronnie eating his purple ice cream and thinking his way through the maze.

Several stories, particularly “Whose Origins Escaped Him” and “We Don’t Celebrate That”, feature metafiction that explores writing about writing. In the former, elaborate footnotes delineate the characters and their actions, explaining why the story is unfolding the way it is and why the writer has chosen to do this. In the later story “We Don’t Celebrate That”, the narrator, a writer, explains how rules can be absurdly imposed on writers in a futile attempt to govern the writing process.

At various junctures in the collection Johnston employs devices that adjust his writing to be focused with the lens of metafiction. Shifts in narrative, jumps in time, intrusions into the narrative tension are all common here. But so too is pathos, as seen in the family dilemma of a recovering alcoholic in the story “We All Considered This”. And we do find compassion in the son-in-law who holds sympathy and kindness for his father-in-law afflicted with Alzheimer’s in “You Didn’t Have to Tell Him”, and share the weighted sadness of the husband dressing his dead wife for the funeral in “He Hasn’t Been to the Bank in Weeks”.

While the world will turn upside down in Johnston’s stories, and the logic and reality will be violated, and a bank teller will hand a patron his bank robber note, it is fiction that also ebbs and flows with human struggle, that is recognizable and relatable and, despite the challenges and uncertainties placed in the reader’s path, there is always a way to see more clearly than we think we do.

Other titles by Sean Johnston

Listen All You Bullets

All This Town Remembers

All This Town Remembers

A Day Does Not Go By