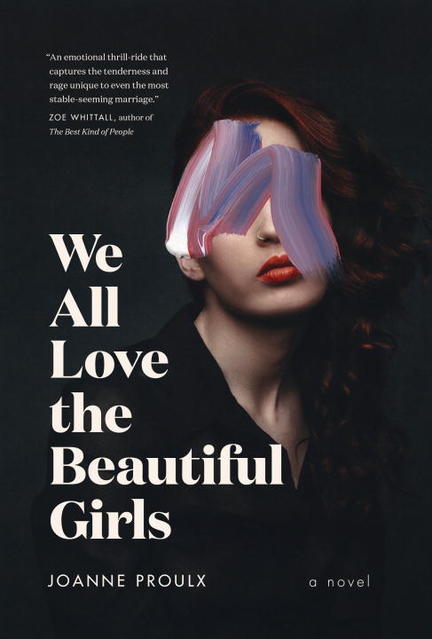 Finalist for the 2018 Ottawa Book Awards
Who do the lucky become when their luck sours?

One frigid winter night, the happily prosperous Mia and Michael Slate discover that a close friend and business partner has cheated them out of their life savings. On the same night, their son, Finn, passes out in the snow at a party — a mistake with shattering consequences.

Everyone finds their own ways of coping with the ensuing losses. For Finn, it’s Jess, a former babysitter who sneaks into his bed at night, even as she refuses to leave her boyfriend. Mia and Michael find themselves forgoing tenderness for rougher sex and seeking solace outside their marriage: Mia in a flirtation with a former colleague, whose empty condo becomes a blank canvas for a new life, and Michael at an abandoned baseball diamond, with a rusty pitching machine and a street kid eager to catch balls in Finn’s old glove. As they creep closer to the edge — of betrayal, infidelity, and revenge — the story moves into more savage terrain.

With honesty, compassion, and a tough emotional precision, award-winning author Joanne Proulx explores the itch of the flesh, sexual aggression, the reach of love and anger, and the question of who ultimately suffers when the privileged stumble.

Joanne Proulx’s first novel Anthem of a Reluctant Prophet won Canada’s Sunburst Award for Fantastic Fiction and was named a best debut by The Globe and Mail and Kirkus Reviews. A feature film adaptation of the novel will be released in 2018. A graduate of the Bennington Writing Seminars, Joanne lives, writes and teaches in Ottawa, Canada.

"When I finished this novel, I wanted to tell everyone I knew to read it. It is one of the best, most important books I've read in a very long time." “Marissa Stapley, The Globe and Mail

"An emotional thrill-ride that manages to capture the tenderness and rage unique to adolescence and middle-age, the heartbreak of first love, and the fragility of even the most stable-seeming marriage." “Zoe Whittall, bestselling author of The Best Kind of People
“With We All Love the Beautiful Girls, Proulx … moves firmly into John Cheever territory, exploring with a keen eye and incisive prose the suburbs of quiet desperation, peeling back facades to reveal the desperation and violence that lurk just below the surface. When that violence comes to a head, the results are as devastating as they are unexpected.…. Proulx excels with precisely that sort of subtlety and gradual revelation. As one reads We All Love the Beautiful Girls, impressions of the characters will shift and change, a verisimilitude that is the result of careful attention and unflinching honesty.” “Toronto Star
"Provocative...Gorgeously written, Proulx's narrative offers a fascinating plot and both a searing exploration of the butterfly effect of trauma and the uncanny persistence of love in improbable circumstances."?Publisher's Weekly
"Unflinching." ?Harper's Bazaar, Best New Books
“Believe the hype about this family novel that’s as complex as it is creative.” “Hello Giggles

“Proulx’s novel covers a lot of territory, with several twists and turns… The story excels in its depiction of women.” “amNY
"We All Love the Beautiful Girls has the ability to leave a reader breathless. The plot twists are daring. The characters and their dialogue capture the ways in which adversity can alter people. Lovers’ wounds are plastered across every page and the veneer of civility becomes shockingly thin. And yet, in the end, love, decency, and forgiveness triumph. Think of the 1986 David Lynch film, Blue Velvet, in which brutality lurks just beneath the surface of everyday life, then erupts ferociously before disappearing back into the depths.” “Quill & Quire

“‘Be good,' one character tells another early in We All Love the Beautiful Girls. No one in this devastating novel heeds this advice. Proulx has written a story that’s as gorgeous as the winter stars overhead. You will all love this beautiful book.” —Neil Smith, author of Boo
"We All Love the Beautiful Girls is a gripping tale of love gone awry,  In a lively plot filled with twists and turns, Joanne Proulx's characters flail about and pay a high price for their impulsiveness and rage.  This is a book to keep readers glued to the page, and enthralled by the author's skill and wisdom." – Lynne Sharon Schwartz, author of Two-Part Inventions
"Joanne Proulx is a rare talent."” Lauren B. Davis

"Proulx is, in other words, a talented inhabitor of people unlike herself...every new writer that surfaces so blessed should be cherished." “Toronto Star
"It is impossible not to marvel at Proulx's mastery." ?National Post

"Proulx lays out what happens when very privileged people cross the line of social acceptability. . . . The book is also about anger and its consequences, both sexual and physical.” “Peter Robb, ARTSFILE

“She preys on simmering class anxieties to craft a dark thriller about the pretense, deception and destruction that ensues when rich people lose their safety net.” “Toronto Life

“With Joanne's raw prose, and surprising plot twists, we cling to the pages as she captures the actions and emotional impulse of each character as they are faced with adversity. . . . this isn’t a traditional family drama.” “Beaux Mondes

Other titles by Joanne Proulx

Anthem of a Reluctant Prophet