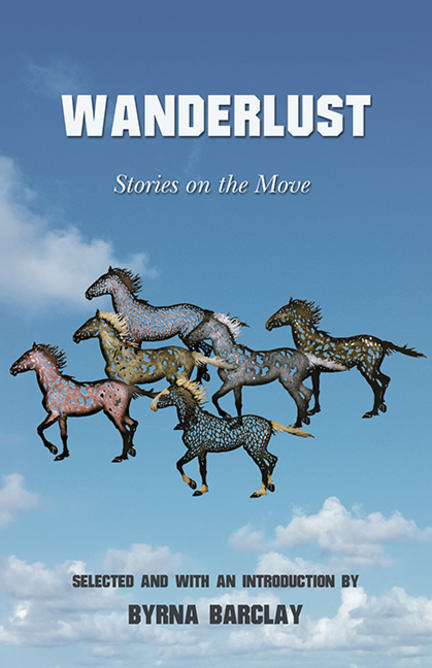 Readers of Wanderlust, an anthology of travel stories, will at once feel that need to roam, the longing for surprise, the thrill of just recognizing the threat of danger, and the nomadic impulse simply to move oneself for the sake of moving, that restless and endless quest for a new beginning — even if it means the end of one life and the start of a new one.

In every story a character embarks on a journey of discovery. They travel through the Nordic Viking age, experience family life in Italy, interpret the Lascaux Caves in France, climb Nicaragua’s volcanoes, undertake a road trip through the villages of Mexico, and finally are brought back to the Canadian prairies. Editor and contributor Byrna Barclay draws inspiration from the philosophers who expounded on the theory that, rather than change, a person simply becomes more of what he or she already was at birth.

Byrna Barclay is the awardwinning author of three novels and three short story collections. Her fiction and poetry has appeared in numerous literary magazines and anthologies. She has served as president of the Saskatchewan Writers Guild and is currently a board member of the Saskatchewan Playwrights Centre. A strong advocate for mental health reform, she served as the President of the Canadian Mental Health Association in Saskatchewan, was the founding chair of the Mental Health Advisory Council, and is the Editorinchief ofTransition Magazine. The mother of two grown children, she and her husband have made their home in Regina, Saskatchewan since 1962.

From “Pirates of the Heart” – Brenda Niskala

AT FIRST, the thought of owning another person did not sit well with Vaino.

And what if this woman was being nice to him just to get ahead? Of course she was. That is what slaves do. They ingratiate themselves. Or they become bitter. Or silent and cunning. No, Vaino thought. They must always be silent and cunning. To stay alive. And here was Tasya, with her big teeth, with her lips so plump, her yellow hair and green eyes, and her almost cruel way of teasing him.

He thought of Leena, shivering with fever on the hide blanket. Leena, dying in that awful place. She must be dead now, in spite of his guard and new friend Tuomi's gift of sight. Vaino did not believe in such things. Best to face the truth. Poor Leena, her spirit, so far from the trees of the ancestors., It would never settle down. Her spirit would wander in that place, the slave pit in the harbour of Gotland, homeless, until he came to find her bones. Leena would not want him to be alone on this long journey. Leena would want him to be with someone. Maybe not a wife. No one could replace her, his partner, his home mate. But she would not want him to mourn. She would want him to live.

He tilted his chin up and to the right a bit, to that place where he could sometimes feel the presence of the spirits as they passed. But Leena was not there. How could she be? Still, he tilted his head and asked the departed grandparents to intercede on his behalf, to forgive him his weakness in not being there to help her, his weakness in leaving her to die. As he had for almost every day since the ship set off for the east, he thought through every moment of his captivity since leaving Gotland.

Was there a moment when he could have turned back, when he could have jumped ship, escaped, and returned to put her to rest? Maybe when they were trading with the Slavs. The camp was a temporary trading place, shaped like a triangle, with the tent forming the narrow peak opening to the waterside. Vaino should have run then, instead of going into that smoky chum, that tent so like the home of his little cousin of the Sami, but so much larger. But run where? The river meandered between low banks, and beyond only miles of flatland, tall grasses, and then nothing more as far as the eye could see. That was the problem. The Norse and the Khanty and everyone else on those plains would see him for hours, could simply ride out after a leisurely visit, pick him up, then put him in the slave tent. Sundvold, the Pretender, and his crew were not looking for grizzled old slaves like him at this stop. Not for the eastern markets.

Other titles by Byrna Barclay

The Trials of Victor Hoffman: A Poetic Drama in Two Acts

Books about travel, migration and immigration that show us what we can learn by going to find ourselves—as readers and people—in places where we don't …