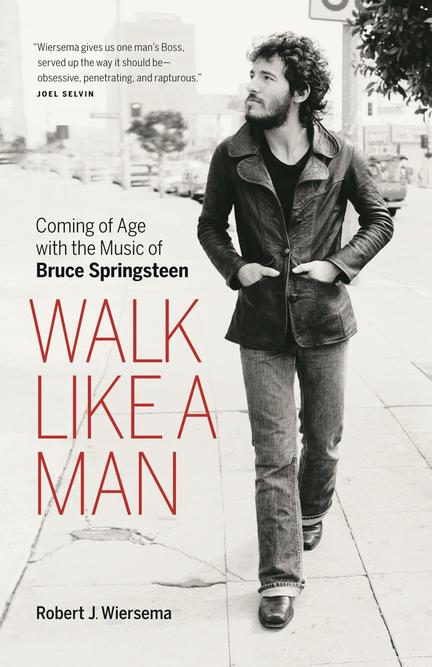 As he enters his sixties, Bruce Springsteen remains a paragon of all that is cool and right. Born in the U.S.A. still ranks as one of the top-selling albums of all time, and Springsteen the man is an unstoppable force, selling out multi-city arena tours year after year. He's a genuine voice of the people, the bastard child of Woody Guthrie and James Brown, and an elder statesman who has inspired generations of bands, including U2, the Hold Steady, and Arcade Fire. He's won twenty Grammy Awards, an Oscar, and two Golden Globes and is a double hall-of-famer.

There are dozens of books about the Boss, exploring every facet of his career. So what's left to say? Nothing objective, perhaps. But when it comes to music, objectivity is highly overrated. Robert Wiersema has been a Springsteen fan since he was a teenager. By most definitions, he's a fanatic: following tours to see multiple shows in a row, watching set lists develop in real time via the Internet, ordering bootlegs from shady vendors in Italy. His attachment is deeper than fandom, though: he's grown up with Springsteen's music as the soundtrack to his life, beginning with his working-class youth in rural British Columbia and continuing on through dreams of escape, falling in love, and becoming a father.

Walk Like a Man is liner notes for a mix tape, a frank and inventive blend of biography, music criticism, and memoir over the course of thirteen tracks. Like the best mix tapes, it balances joy and sorrow, laughter seasoning the dark-night-of-the-soul questions that haunt us all. Wiersema's book is the story of a man becoming a man (despite getting a little lost along the way), and of the man and the music that have accompanied him on his journey.

ROBERT J. WIERSEMA is a writer of fiction and non-fiction and a reviewer who contributes regularly to several national newspapers. He is the best-selling author of two novels: Before I Wake and Bedtime Story and a non-fiction book about Bruce Springsteen, Walk Like a Man. He lives in Victoria, British Columbia.

Walk Like a Man beautifully and accurately describes the way that rock and roll and fandom can touch and change our lives.”
Craig Finn, The Hold Steady

"Walk Like a Man gives us one man's Boss, served up the way it should be-obsessive, penetrating, and rapturous. Wiersema is no critic, but an articulate every-fan who taps the Springsteen zeitgeist as it radiates from the music into his own life."
Joel Selvin, senior pop music correspondent, San Francisco Chronicle

"Walk Like a Man is about growing up, getting old, and being lucky enough to have a treasured soundtrack to make sense of it all."
Ray Robertson, author of David and Moody Food

Other titles by Robert J. Wiersema

World More Full of Weeping, The