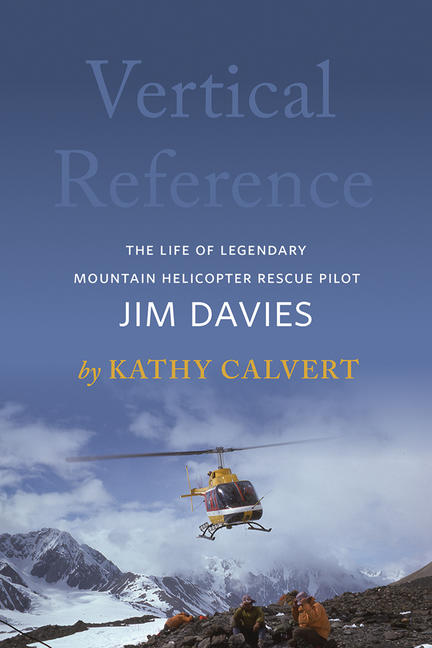 An exciting and heart-pounding look at one of Western Canada’s most adventurous individuals, known as a pioneer pilot of the heli-ski industry and as the first mountain-rescue pilot in the Canadian National Parks system.

Jim Davies is an icon of competence and courage as the first heli-skiing pilot in Canada. But it is his groundbreaking work as a helicopter rescue pilot for Parks Canada that made him a legend to all who worked with him. His stellar career as a pilot overshadowed his other talents as a ski racer and artist.

Jim received several awards for his work in mountain rescue, including the Helicopter Association International – Pilot Safety Award of Excellence, the Alberta Achievement Award for excellence in helicopter flying, the Summit of Excellence Award at the Banff Film and Book Festival, and the Robert E. Trimble Memorial Award for “distinguished performance in helicopter mountain flying.” He is now retired and living in Banff, pursuing his love of painting and photography.

Kathy Calvert grew up in the Canadian Rockies. In 1974 she became one of the first female national park wardens in Canada; in 1977 she was a member of the first all-women expedition to Mount Logan and in 1989 was on the first all-women ski traverse of the Columbia Mountains from the Bugaboos to Rogers Pass. She is the author of three books: Don Forest: Quest for the Summits (RMB 2003), Guardians of the Peaks: Mountain Rescue in the Canadian Rockies and Columbia Mountains (RMB 2006) and June Mickle: One Woman's Life in the Foothills and Mountains of Western Canada (RMB 2015). She and her husband, Dale Portman, live in Cochrane, Alberta.

"A funny, engaging and all-around wonderful book of stories about a legendary group of Canadians! It's full-on adventure backed up with exhaustive research and a deep insider's knowledge of Canada's mountains. Loved it!" —Will Gadd

"It's funny, engaging, ruthlessly researched and an all-around great read that will make you laugh out loud at the crazy adventures in an era that brought us helicopter mountain rescue and heli-skiing. Thanks to Jim Davies and the rescue techniques he developed, many of my friends are alive today." —Will Gadd

"Kathy Calvert's book deeply honours Canada's greatest rescue pilot. The stories in these pages are timeless and tell the tale of the effort one human being made to care for others. This is the most important work one can do, and the story of ever striving in the effort to help those in need is how mankind will move forward." —Ken Wylie, author of Buried, IFMGA Mountain Guide, Adventure Educator

"Heroes do great things, always in service of others. Jim Davies personified this ideal. It is likely the effort to help is what made him so great." —Ken Wylie, author of Buried, IFMGA Mountain Guide, Adventure Educator

"So heartening to read of Jim Davies, a hometown Banff boy, contributing so much to western Canadian mountain culture. I love our history, and Jim's life is such an enriching and important piece of our collage. What a gift to us all. Thank you so very much, Jim, and thank you, Kathy Calvert, for sharing Jim's amazing life." —Barry Blanchard, alpinist, author of The Calling: A Life Lifted by Mountains

"Stories are key to every culture, forming our sense of who we are and how we came to be. As a pivotal contributor to the evolution of both the helicopter skiing industry and the professional mountain rescue service, Jim Davies tells a story that is essential to the foundation and the modern branches of the unique lifestyle activities and culture of western Canada's mountains. Kudos to Kathy Calvert for recording and sharing these bold, often hair-raising, always entertaining, and culturally vital stories of Jim Davies's life and flying career in Vertical Reference." —Lynn Martel, author of, among others, Stories of Ice: Adventure, Commerce and Creativity on Canada's Glaciers

Other titles by Kathy Calvert

One Woman's Life in the Foothills and Mountains of Western Canada

Guardians of the Peaks

Mountain Rescue in the Canadian Rockies and Columbia Mountains

Quest for the Summits