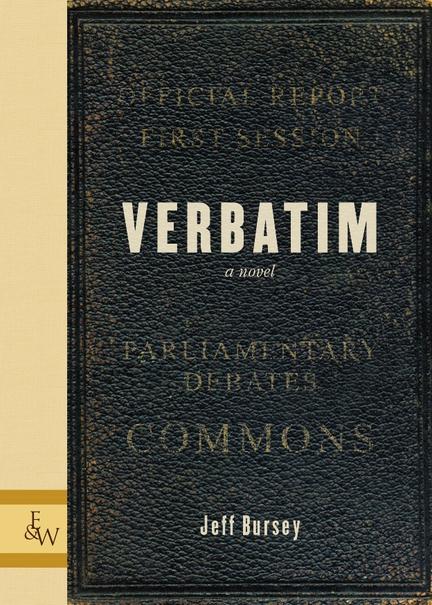 Verbatim: a Novel is a blackly humorous exposé of parliamentary practice in an unnamed Atlantic province. The dirty tricks, vicious insults, and inept parliamentary procedures of the politicians are recorded by a motley crew of Hansard employees.

But when the Hansard bureaucrats begin to emulate their political masters, the parliamentary system's supposed dignity is further stripped away. Jeff Bursey reveals in both high and low humour how chaotic and mean-spirited the rules behind thegame of politics are, and how political virtue corrupts everyone.

Jeff Bursey has worked for Hansard in Atlantic Canada for seventeen years, first as a transcriber, and then as an editor. Born in St. John's, Newfoundland and currently living in Charlottetown, PEI, Jeff has only ever lived on islands

". . . a tour de force of verbal dexterity that wields irony so deftly that the book, despite its intimidating scale, both challenges and delights." - Dalkey Archive Press

". . . an innovative and insightful narrative that is an uproarious read. . . " -Arts East

"Let the record also show that this is probably about the funniest intelligent book on politics you can get your hands on these days." -; American Book Review

". . . if politics is your thing, and if you have a taste for satire, then this would be just an ideal read. . . " -Tales from the Reading Room

Courage from the Outliers

A recommended reading list by the author of new novel Constant Nobody.