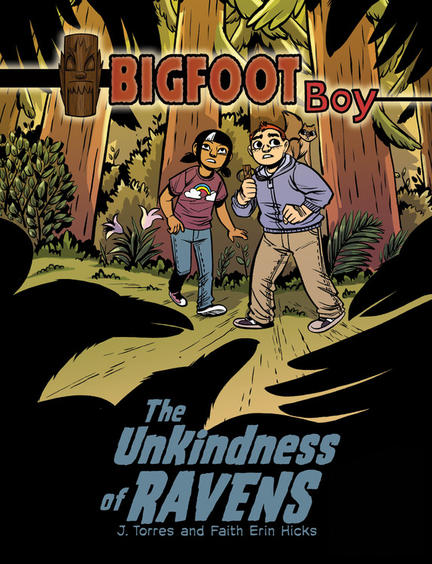 Rufus has returned to Grammy's for the weekend, and he's brought along the wooden Q'achi totem he uncovered on his last visit. After setting out to find his pal Penny in the woods and losing his way, Rufus once again turns to the totem for help. Unfortunately, Talon and Beak, a pair of greedy ravens, are watching from the trees as Rufus uses the powerful totem to transform into Bigfoot Boy. Imagining “the things we could do with that totem,” Talon decides his flock of ravens must steal the totem. Though Rufus and Penny desperately try to thwart their plans, the ravens are tricky, deceitful and determined to do whatever it takes to get what they want. Will Rufus, Penny and their squirrel friend, Sidney, find themselves outsmarted by a bunch of birds?

This is the second book in the terrifically entertaining trilogy of graphic novels by award-winning author J. Torres. Here, the mystery surrounding the totem deepens as readers learn of its origins and Rufus's connection to its creator. The artwork by the renowned Faith Erin Hicks is rich with depictions of the Pacific Northwest landscape and its legends and mythology, which underlie and set the tone for the premise of the series. These books work well for teaching environmental awareness, as saving the woods from development becomes a central mission for Rufus and Penny. There are also important lessons to be gleaned on solving problems and on forming and maintaining friendships.

J. TORRES is a Canadian comic book writer. He is perhaps best known for his run on DC Comics' Teen Titans Go, the Eisner-nominated Alison Dare, and the Junior Library Guild/TD Summer Reading Club title Bigfoot Boy. Winner of the Shuster Award for "Outstanding Writer," Torres has worked with characters from A (Archies) to Z (The Mighty Zodiac) and many more in between (Avatar, Batman, Ninja Scroll, Simpsons, WALL-E, Wonder Woman, Yo Gabba Gabba, and X-Men, to name a few).

Faith Erin Hicks draws and writes comics in Halifax, Nova Scotia. Her works include The War at Ellesmere, Brain Camp and Friends with Boys.

Other titles by J. Torres

Chirp: Knights of the Awesome Castle

Chirp: To the Peak

Other titles by Faith Erin Hicks

Comics Will Break Your Heart

The Nameless City: The Divided Earth

The Nameless City: The Stone Heart

Sound of Thunder, The