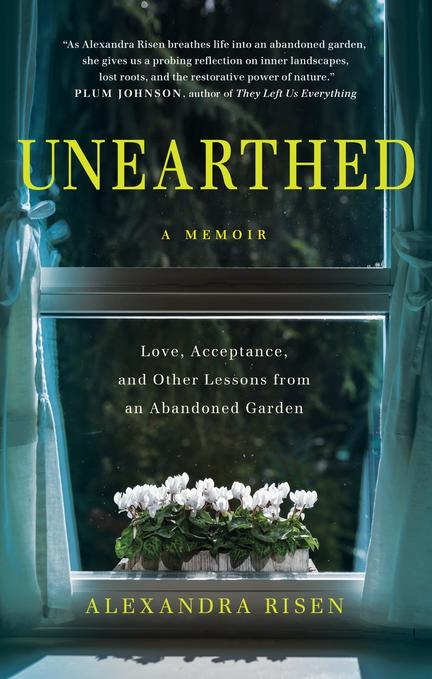 Alexandra Risen's father dies just as she and her husband purchase a nondescript house set atop a natural gorge in the middle of the city. The garden is choked with weeds and crumbling structures. Over the years, as she undertakes the replanting, it stirs memories of her childhood when a nearby forest was her only escape from an empty home life.

As Risen beats back the bushes to unveil the garden’s mysteries, her mother has a stroke and develops dementia. On one of her last visits home, she discovers an envelope of yellowed documents that helps her piece together some of her parents' unknown story.

Uprooted from the Ukraine to work in Nazi Germany during the Second World War, her father and mother met and married in a Displaced Persons camp before emigrating to Edmonton. They never discussed their troubled past. Her father shut himself into a safe, silent world and spoke few words to Alex during his lifetime. Her mother sought refuge in her garden amidst her vegetables, flowers and fruit trees.

As Risen toils in her own garden, lifelong resentments and misunderstandings are replaced with memories and connections to her parents. Organized around various flowers, trees and shrubs that evoke particular memories, Unearthed is an affecting account of tangled family relationships, reconciliation and the healing power of nature.

Alexandra Risen has lived her life in gradual migration from the northwestern prairies to the hilly southeast. She loves her garden as much as she loves technology. She has published essays in The Globe and Mail and Hippocampus Magazine. She holds a Certificate in Creative Writing, Bachelor of Commerce Degree, an MBA, and a Diploma in Urban Planning. A Board Member of the Toronto Botanical Gardens, Alexandra lives with her husband, son and rescued dog in Toronto, Ontario.

“To call this book’s subject a massive project would be a massive understatement. . . . The story, like the garden, is ambitious in scope, but Risen’s amazing dedication pulls it together, both on the page and in the garden. A remarkable book.”—Booklist

“Blogger and gardener Risen’s debut memoir is based on a 'collection of reminiscences' from a 10-year period. After the death of her father, an emotionally distant man from the Ukraine, the author and her husband purchase a ranch-style house and an acre of land surprisingly situated in downtown Toronto. The garden is neglected, but Risen, steeped in 'love of nature and living things,' sees the possibilities. Having spent her childhood playing in a ravine near her home in Alberta, she’s eager to restore the abandoned property, once part of a larger estate. The land is rife with unexpected delights: a huge, decaying pagoda, underground aquifers, a pond, koi, deer, and all manner of vegetation. She soon begins making maple syrup, cattail fried rice, and bleeding heart valentines (recipes, instructions, and foraging guidelines included). As the restoration painstakingly progresses, Risen simultaneously delves into her past, exploring why her immigrant parents never revealed details of their family history. She also shares her love of the land with her ailing mother and with her husband and young son (who grows from toddler to techie teen in the course of the decade’s work). As she restores the property and heals her long-troubled soul, Risen paints a vivid and exquisite portrait of nature and its profound significance.”—Publishers Weekly