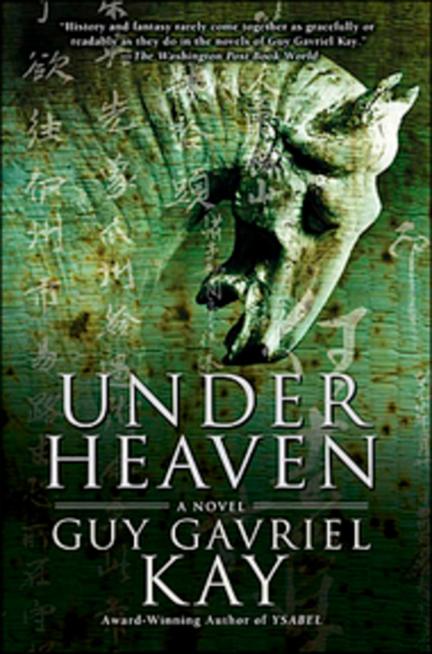 Inspired by the glory of Tang Dynasty China in the eighth century, Guy Gavriel Kay melds history and the fantastic into something both powerful and emotionally compelling. Under Heaven is a novel on the grandest narrative scale, encompassing the intimate details of individual lives in an unforgettable time and place.

Shen Tai is the son of a general who led the forces of imperial Kitai in that empire's last war against their western enemies from Tagur, twenty years before. Forty thousand men on both sides were slain beside a remote mountain lake. General Shen Gao himself has died recently. To honour his father's memory, Tai has spent two years of official mourning alone at the battle site among the ghosts of the dead, laying to rest their unburied bones.

One spring morning, he learns that others have taken note of his vigil. The White Jade Princess in Tagur is pleased to present him with two hundred and fifty Sardian horses, given, she writes, in recognition of his courage, and honour done to the dead.

You gave a man one of the famed Sardians to reward him greatly. You gave him four or five to exalt him above his fellows, and earn him jealousy, possibly mortal. Two hundred and fifty is an unthinkable gift, a gift to overwhelm an emperor.

Tai starts east towards the glittering, dangerous imperial capital and gathers his wits for a return from solitude by a mountain lake to his own forever-altered life.

GUY GAVRIEL KAY is an international bestselling author. He has been awarded the International Goliardos Prize for his work in the literature of the fantastic, is a two-time winner of the Aurora Award, and won the 2008 World Fantasy Award for Ysabel, a #1 bestseller in Canada. His works have been translated into more than twenty-five languages. Visit his Canadian website at www.guygavrielkay.ca and his authorized international website at www.brightweavings.com.

“This is a hell of a novel. Guy Gavriel Kay chooses a time and place in history, then makes it his own. The names change, and fictional characters join real ones, but the historical background is real and thoroughly researched... this is thrilling historical fiction with a mere shimmer of the otherworldly. There’s nothing remotely ethereal about it. We careen along the Silk Road to Wall watchtowers, warrior monasteries, imperial capitals, Mongolian steppes, elite courtesan dwellings and the private sedan chair of the most powerful woman in the world. It’s riveting and tremendous fun, but it would be wrong to call it a romp – it’s moving and profound, and in the end it’s about trying to find some kind of life in this world. It’s also appealingly complex and a fascinating portrayal of court intrigue when the wrong phrasing of a compliment could mean death. You won’t read many books more enjoyable than this one; the fact that you’ll suddenly find yourself an expert on mid-Tang history is a considerable bonus.” - That's Shanghai Review

"A recurring problem in fantasy and science fiction is the absence of strong and plausible female characters. This is one of Kay's great strengths. His courtesans and warrior maidens are fully realized and believable, and not merely the stereotypical place holders they too often are in the hands of less skilled authors...Under Heaven is an engrossing read, filled with well-drawn characters who live in a richly detailed world." - Winnipeg Free Press

"Simply put, Under Heaven is one of the most exhilarating novels I’ve read. a novel so beautiful, so carefully imagined, so elegantly constructed as to dwarf any efforts to explicate, expound, or analyze — a book that has given me a tremendous amount, but of a nature that I find very hard to explain. But that’s a feeble excuse, for my difficulties are nothing compared to the challenge Guy Gavriel Kay sets himself again and again; if we cease to strive after the seemingly impossible, books of this ambition and grandeur would no longer be written." - Walrus Magazine

Other titles by Guy Gavriel Kay

All the Seas of the World

A Brightness Long Ago

Children of Earth and Sky

The Last Light of the Sun

A Song for Arbonne

Book Two of the Sarantine Mosaic