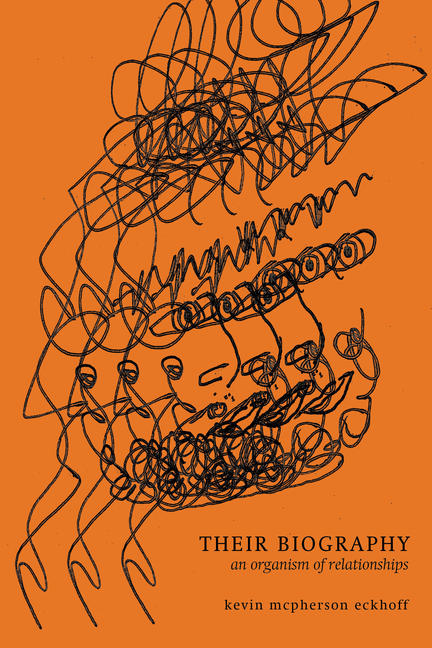 Would it be possible to compose a book that appears to be "about" its author, but is indirectly about something else, like identity or relationships or language? Maybe a book not written by a hero... but by many?

This was the challenge taken up by Kevin McPherson Eckhoff in his fourth book, their biography: an organism of relationships. This collaborative memoir collages together word-portraits from friends, family, coworkers, strangers, robots, and even adversaries in order to create a silhouette of not a single person, but of the manacles that connect people to one another.

their biography is meant to make people think--it's broad array of voices and poetic/prosaic forms disturbs comfortable patterns of reading, and its subject is as much about the contributors as the author. Eclectic and desolate, confessional and dubious, this record of relationships defies authorship, biography, and individualism.

Fans of Gregory Betts's "Facebook Poem Project" or Rachel Zolf's Tolerance Project, along with anyone compelled by contemporary poetry and conceptual art, will connect with this pixelated investigation into identity, and the true meaning of 'self' as we and others define it.

kevin mcpherson eckhoff's poetry has been described as having "purity, clarity, and intensity of emotion" while "[undermining] our common sense of language." Recent work appears in the anthologies Why Poetry Sucks and TAG: Canadian Poets at Play, and he co-edited the final issue of Open Letter with his best friend, Jake Kennedy. As the managing editor at Kalamalka Press, he runs the John Lent Poetry-Prose Award, a letterpress chapbook competition for emerging writers. For eight months of the year, he teaches at Okanagan College, and for the remaining four, he hides out at the Shuswap River or Starlight Drive-in or Rose Mountain with his Laurel and Lionheart. Connect with Kevin on his website, http://kevinmcphersoneckhoff.com/, or on Facebook at https://www.facebook.com/kevinmcphersoneckhoff.

Praise for Their Biography:
"It might be the best autobiography not written by its subject, and it's certainly the funniest." - Jonathan Ball for This Magazine
Sometime between the time he was born and the fascimile he is now, kevin figured out that it's possible to change one's privileged nature by changing one's use. So, 'Use me' is what Their Biography begs - and by invoking this interconsumption of friendship and social cannibalism, kevin can only present kevin as a decommissioned object, sinking under the burden of an impossible individuality, yawning into the surreal latex of his own umbilical cord as he struggles to emerge. It's exactly this that makes Their Biography so deliciously malicious. - Trisha Low, author of The Compleat Purge

Other titles by Kevin Eckhoff

19 Poetry Collections to Read This Spring