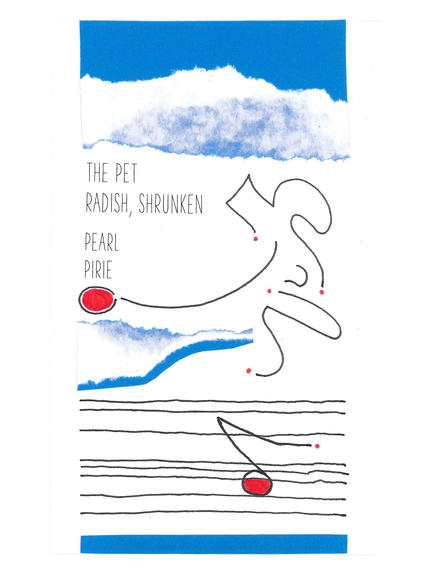 In this post-lyrical era, poems can be stories, or they can just as easily be exuberant laughter set to words, an experiment in language, or an incidental collation of plays on a Scrabble board.

the pet radish, shrunken, the third full collection of poetry from the inimitable Pearl Pirie, deals in the poetics of sound, language, and play. In true Pirie style, this fresh, quirky, and clear-seeing collection speaks in a range of styles and voices: From a military convoy of turtles, to a Kafkaesque conversation with a housefly, to the dissection of a fruit machine, Pirie offers oulipo found speech as it integrates and disintegrates, plays with and tumbles through language.

Earning comparisons to Jenny Sampirisi's Croak and Leigh Kostilidis's Hypotheticals for their shared sense of linguistic playfulness and curiosity, the pet radish, shrunken will appeal to exploring minds who are ready to question language, society, and self while not minding a taint of grief and comedy that necessarily creeps in around the edges.

Pearl Pirie is the author of been shed bore (2010) and Thirsts (2011), which won the Robert Kroetsch Award for Innovative Poetry. Her poetry has been published in numerous literary journals, including filling Station, BafterC, Arc Poetry Magazine, Gusts, PRECIPICe, Dandelion, and This Magazine. Her poem "Summer Names" was shortlisted in the Best Canadian Poetry, 2014, and she made the 50-poem longlist for Best Canadian Poetry, 2011, for her poem "The First Mother's Day After Dad's Death." (Tightrope Books). Pirie's work has been included in several anthologies, focused on innovative poets, haiku, and other genres of writing. She has several chapbooks produced in Canada, France and Japan. She has produced two dozen titles under phafours press. Since 2009 she has managed the Tree Seed Workshop Series. Connect with Pirie on her website, www.pearlpirie.com, her poetry and poetics blog, http://pagehalffull.com/pesbo, or on Twitter @pesbo.

Praise for the pet radish, shrunken
Quirky and fresh, playful yet serious, Pirie's collection, the pet radish, shrunken, demands and activates new pathways of reason. These line-by-line lyrical segments both tantalize and take the reader down the rabbit hole (pulling rabbits out of hats along the way) with their semantic surprises and jumpy music. Pirie sees the world askew and brings the reader along for the ride. An invigorating collection. - CATHERINE GRAHAM

The poems collected in the pet radish, shrunken invite us equally into routine and catastrophic events. Pirie submits "we are always settling into a new now" and leads us through a life revised by the external and internal encounters of a day. With humour, play, and brass, Pirie revels in the daily ruckus of domesticity, verbatim conversations, and the language that must somehow hold a whole existence. - JENNY SAMPIRISI

In Pearl Pirie's poems, language ferments, foments a "vinegar vigour." Flipping the labels off contemporary mores, cooking with sound, she offers quick food for thought. Keep up with her if you can. - DAPHNE MARLATT

Precise riots of vowels and consonants rattle these poems. Pearl Pirie's lines burn with sonic-rich images: "kalimba of algae" and "tight loops of oops." Her verbal verve is rooted in an ecstatic attentiveness to language, both found and formal. Charged with innovative and lyrical energies, the pet radish, shrunken is a gorgeous rebellion. - EDUARDO CORRAL

Other titles by Pearl Pirie

19 Poetry Collections to Read This Spring