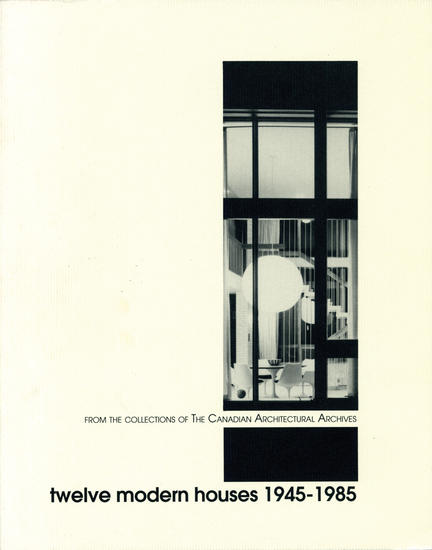 Twelve Modern Houses 1945-1985, is part of the ongoing mandate of the Canadian Architectural Archives to examine the characteristics of Canadian architecture as reflected in the collections of the University of Calgary Library, examines twelve architect-created houses designed between the 1940s and the 1980s for several distinct regions of Canada. The architects chosen number among the most prolific and best known in Canada who were working during this period, including Raymond T. Affleck, Raymond Moriyama, Arthur Erickson, Douglas Cardinal, John B. Parkin Associates, and Patkau Architects.

Other architects with perhaps a more regional reputation have also been included, such as the Vancouver-based firm of McCarter & Nairne, Calgary's Jack Long, and Edmonton's Peter Hemingway.

Apart from the documentation of the twelve houses (drawings and photos), there are interpretative essays on each. A co-authored introductory essay explores several related themes: modernity, the contemporary house, approaches to landscape, and the role of drawings in contemporary practice.

Graham Livesey is associate professor in the Faculty of Environmental Design at the University of Calgary. He was a principal in Down + Livesey Architects of Calgary from 1995 to 2004.

Michael McMordie is a Professor Emeritus of the Faculty of Environmental Design at the University of Calgary and former Director of the Interdisciplinary Graduate Program. He has written numerous articles on architecture and environmental design.

Other titles by Graham Livesey

A Fifty Year Retrospective, from 1967 to the Present

Explorations of the Contemporary City

Explorations of the Contemporary City

Other titles by Michael McMordie

The Architecture of Jeremy Sturgess