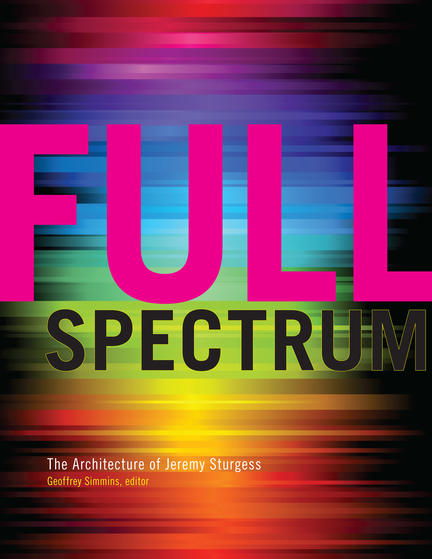 Limited Edition: This unique look at Calgary architect Jeremy Sturgess's creative career is presented as a boxed set of nine portfolios in a print run of only 750 copies.

Governor-General award winning architect Jeremy Sturgess recently celebrated thirty years in practice in Calgary, where he has been based his whole career. During that time, Sturgess has made a major contribution to transforming the architectural face of the city, from individual houses to large-scale public projects such as the Calgary Water Centre, the Grand Theatre, and Calgary's most recent downtown LRT stations. Full Spectrum provides a comprehensive and multifaceted examination of Sturgess's architecture and urban design and assesses his contribution to Canadian architecture generally and Calgary architecture in particular.

Editor Geoffrey Simmins has gathered perspectives from a number of individuals with whom Sturgess has enjoyed long-term professional relationships - an artist, an urban designer, an architect colleague, an architectural critic, and a journalist. Along with reflections on Sturgess's personality, philosophy, and creative growth, these contributors provide in-depth discussions of a number of Sturgess's most celebrated projects. Simmins himself has drawn on Sturgess's papers and several personal interviews to craft an insightful introduction to the volume.

Strikingly illustrated with architectural line drawings and with photos by award-winning photographer Robert Lemermeyer and featuring an innovative design that facilitates panoramic, multi-paged visual perspectives, Full Spectrum lives up to its title, both in reflecting Sturgess's well-known affinity for vivid colours and in expressing the full range of his remarkable creative odyssey.

This limited-edition book from the University of Calgary Press is a collection of essays describing the impact that architect Jeremy Sturgess has made on the city of Calgary and the Prairies, and in contributing to architectural dialogue in Canada over the past 30 years. Encased in a jarringly vivid box emblazoned with fuchsia text on the cover, the book screams colour--something that is seemingly part of Sturgess's overarching design philosophy. One of the book's essays, David Down's "Chromatic Iconoclast," elaborates on Sturgess's fascination with colour, equating this preoccupation with a very human approach to building--seen in the design for the Chuzenji Kanaya Hotel in Japan (1989). There, Sturgess fuses the Canadian mountain lodge typology with Japanese architecture, allowing the landscape to behave as a colourful backdrop to the hotel. Full Spectrum contains nine booklets, each one bearing its own distinct colour and containing dozens of inspirational sketches and informative drawings of a wide range of projects. Designed by Melina Cusano, the book is thoughtfully edited by Geoffrey Simmins, who is also the curator of the travelling exhibition bearing the same name. Full Spectrum includes a requisite essay by Trevor Boddy--a Prairie-minded iconoclast in his own right--who has followed Sturgess's career since he himself was an architecture student. Anne Suche has written an insightful essay that examines Sturgess's multi- and single-family residences, and an essay by Keith Orlesky discusses the importance of Sturgess's contribution to the evolution of the Calgary urban design fabric. Other essays include those by George Baird--a former teacher of Sturgess, and Derek Besant--a well-known artist who has worked with Sturgess in Calgary's arts scene for many years. IC

It’s always a little daunting to be lavished with praise. So it must be incredibly daunting when you’re simultaneously the focus of an exhibition and a book, as well as being saluted for your contributions to a significant university archive. But such is the life of prolific Calgary architect Jeremy Sturgess.

Full Spectrum, at the Nickle Arts Museum, is a small overview of some significant projects from his firm, Sturgess Architecture. Calgary’s Water Centre, the Grand Theatre, the Seventh Ave. LRT refurbishments, The Bridges development in Bridgeland and a classically themed contemporary house on Bowen Island, B.C., all grace the gallery’s colour-splashed walls.

Suitable for a man who often wears bright colours, the walls have been painted with a green strip that surrounds the space and houses photographs of his work. Strips of pink, purple, blue, red, green and yellow accentuate the once-white walls.

Although the exhibition at the gallery is well-thought-out and interesting, it’s not the real star of the show. The University of Calgary Press has taken the spotlight with a colourful collection of essays and architectural sketches spanning the 33-year career of Sturgess and his firm.

Similar to the exhibition space, the book or, more appropriately, the nine booklets that are housed in one large box, come in a wide range of colours. Each booklet contains an essay, with pages that fold out to reveal the sketches.

Despite his flamboyant attire and celebrated career, Sturgess is quick to diffuse the credit. “As much as this is called the work of Jeremy Sturgess, what I am is the glue that’s been consistent over 30 years,” he says to the large crowd gathered at the opening of the exhibition. “It’s really about all the people who have been part of Sturgess Architecture over those 33 years.”

Sturgess’s practice is focused on integrating buildings into their surroundings, rather than forcing a structure into an unsuitable space. It’s about the integration of human elements, the specifics of a site and desire for inspired designed. His firm also maintains a strong urban design practice and was selected as the master planner for the public spaces for the Bow building.

For someone comfortable with the title “master planner,” abandoning control of this project to those who put the book and the exhibition together was not easy, but he hopes that it allows for a better understanding of the design process.

“I’ve always relied on critical review of our work to understand how our work should be shaped and how it is influencing,” he says.

Helping in this regard is the contribution of his firm’s papers to the Canadian Architectural Archives, housed at the U of C. Correspondence, sketches, contracts - all significant documents - will be donated to the collection, which is the largest of its kind focused on contemporary Canadian architecture.

That may sound a tad dull to an outsider, but according to Tom Hickerson, the university librarian and vice-provost of library and cultural resources at the U of C, the documents are a key source of information.

“As documents, architectural records are important in defining what has gone before,” he says to the exhibition’s opening crowd. “The building itself carries a wealth of information, but often it may no longer exist, or it may not exist in its original form or design, or it may not have been built as it was originally designed. Therefore, the record of the architect’s work may not be the actual building, but the archival documents that give evidence of the building’s plan, design, construction and intended use.”

However, judging from the small drawings of proposed projects designed by Sturgess Architecture adorning one wall of the gallery, what Calgarians ought to be more excited about is the future rather than the past. As Calgary matures into a place of architectural acceptance and sheds its past drabness, Sturgess and his firm appear to be finding an even stronger footing.

The University of Calgary Press has taken the spotlight with a colourful collection of essays and architectural sketches spanning the 33-year career of Sturgess and his firm.