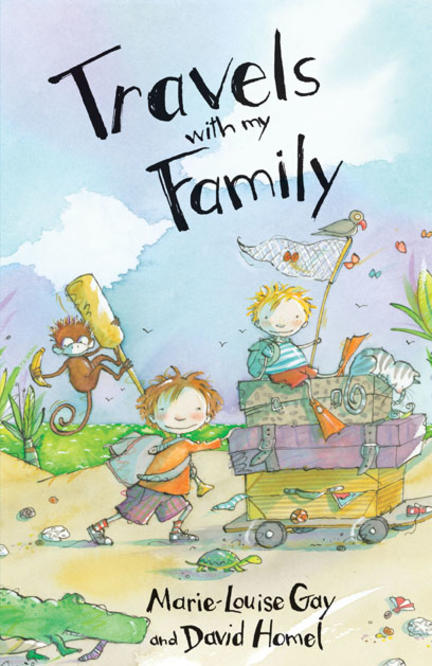 Family vacations are supposed to be something to look forward to. Unless, that is, your parents have a habit of turning every outing into a risky proposition -- by accident, of course. So instead of dream vacations to Disney World and motels with swimming pools, these parents are always looking for that out-of-the-way destination where other tourists don't go. Their adventures involve eating grasshoppers in Mexico, forgetting the tide schedule while collecting sand dollars off the coast of Georgia, and mistaking alligators for logs in the middle of Okefenokee Swamp.

Travels with My Family is told from the point of view of a long-suffering big brother who must fulfill many roles in this eccentric family: keep little brother out of trouble, humor artist Mom, and discourage Dad from pulling out the road map to search for yet another off-the-beaten-track destination.

Husband-and-wife team Marie-Louise Gay and David Homel and have combined their prodigious writing and illustrating talents with their own family memories to produce a very different travelogue.

David Homel was born in Chicago in 1952 and left that city in 1970 for Paris, living in Europe the next few years on odd jobs and odder couches. He has published eight novels, from Electrical Storms in 1988 to The Teardown, which won the Paragraph Hugh MacLennan Prize for Fiction in 2019. He has also written young adult fiction with Marie-Louise Gay, directed documentary films, worked in TV production, been a literary translator, journalist, and creative writing teacher. He has translated four books for Linda Leith Publishing: Bitter Roase (2015), (2016), Nan Goldin: The Warrior Medusa (2017) and Taximan (2018). Lunging into the Underbrush is his first book of non-fiction. He lives in Montreal.

...sprinkled with humor, moments of discovery, and an appreciation for the beauty and diversity of less-lauded destinations....a good choice for those new to chapter books or for struggling readers.

Written in the voice of a kid humouring his parents and plentifully illustrated with gay's pen-and-ink drawings...this may make those who aren't going on exotic holidays glad they get to stay home.

...[Gay's] and Homel's prose is conversational without being lax, lively without sliding into farce, and gently sardonic rather than the hard-edged, smart-aleck tone so familiar in contemporary middle-reader fiction told in the first person....each chapter makes a perfect read-aloud, perhaps even for the back seat of a car. Within each mini-travelogue, there's enough humour and mild excitement to hold attention, and the prose is polished bright, clean, and supple so that it almost reads itself aloud. An added attraction are the many black-and-white drawings by Gay in her characteristic style: big-headed children with minimal features and a loveable gangliness of limb; lively evocations of weather and landscape with a few quick lines; and a sense of energy, curiosity, and delight in the world.

Geographic and scientific tidbits are cleverly embedded in each story, often within some funny-in-retrospect detail that is part of a funny, well described larger picture. Readers won't even notice they're learning something...Homel and Gay should collaborate more often.

...the prose is polished bright, clean, and supple so that it almost reads itself aloud.

The family's episodic adventures, relayed by the older brother in a droll, first-person narrative, are often comical and sometimes suspenseful as they offer glimpses of natural wonders, extreme weather, and exotic locales.

If you want a new read aloud and great incentive to get kids sharing their family vacation stories, here's the book for you.

...it has the ring of truth for anyone who has ever been forced to spend long hours in the back seat of a car.

These hilarious adventures sparkle...Marie-Louise Gay (with her co-writer and husband David Homel) gets the characters, their inner thoughts and outward dialogue, bang on.

...an amusing look at family life on the road...this story will entertain young armchair travelers. Recommended.

Other titles by David Homel

A House Without Spirits

Lunging into the Underbrush

The Lily Pad and the Spider

A Journey through Beijing's Forbidden Underground

The Weight of Snow